Years ago, I had an interesting experience in a grocery store. I heard a toddler yelling. This is not rare but what was not so rare was his purpose in yelling. He was shouting at another toddler, ensconced in a shopping cart, as was the first child. Neither was old enough to speak, but they were talking, in their own fashion. One would yell, and the other would answer. The communication was incoherent babble, probably meaningless - in terms of words - to the children themselves, but as far as they were concerned, they were speaking. They had no idea that adults used sentences; so far as the toddlers knew, adults used gibberish, just as they were. One spoke, the other answered. It was an astonishing example of a rudimentary attempt at communication which was, to the participants, quite successful.

I relate this incident because I was reminded of it during an argument with Cammie. I made the mistake at some point of holding her up to the kitchen window. This is not a window to which the beasts can get to on their own. Well, it is, but they must walk across the kitchen counters to achieve it, and they are forbidden from doing this. Cammie was engrossed by what she saw and smelled through the window, and then, perhaps predictably, wanted to continue viewing the wide world from this unusual vantage point. She tried to do so on her own, and was told more than once to get off the counters. This is, I accept, my fault.

One time recently, I caught her on the kitchen table. This is, as the border reivers used to say, ‘debatable land’. The cats can go up there, but cannot spend much time there. All right, they can, but they must be fastidiously clean about it. All right, I wash the table afterward. Anyway, the princess was on her way to the counters. I knew that, she knew that, she was caught and I told her to get down. There ensued an argument. 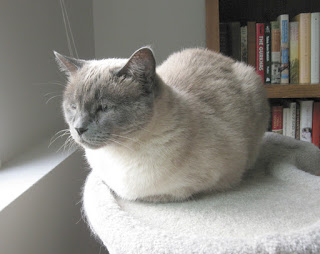 I repeated my command, several times, and she retorted with what sounded like different responses each time. None of the responses sounded polite. I eventually had enough of her backtalk and told her to go to her room, or the equivalent. She jumped down, gave me a rude reply and hissed as she walked away.

The point is that Cammie was communicating with me in a rudimentary fashion, just as the children were. She was not imitating adults; she is an adult cat, and so was telling me off in a precise manner - the manner in which a cat will talk. I’m sure each response had meaning, and likely a different meaning than the one before, though they all probably corresponded to some insult regarding my parentage. The princess was, in an elementary way, countering my statements. We knew what each other meant, we knew what we were trying to tell one another. We were trying to get our views across. That is the essence of communication.

Too much should not be read into this exchange, of course. Yet animals do send messages to each other verbally. A pair of wild beasts, meeting by chance in the forest, will issue, and respond to, challenges. This is, I believe, accepted as fact by most people. Cammie and I were not fighting, but the pattern of our exchange was similar: a short remark on my part, followed by her peevish reply. So I don’t think it’s unreasonable to claim that we were communicating, having a conversation, albeit primitive.

Being limited in what they can say cats will signify intent and meaning in action, as well as sound. And we humans, not always able to convey our purpose to animals, will do the same. Now and then, though, we find common ground for speech, and grunt and squeal and yell like cave-dwellers who haven’t yet devised language. There is often understanding, nonetheless, just as in the case of the cave-dwellers.

But all this doesn’t mean Cammie wasn’t up on the table, the counter and at the window after I’d gone to sleep. 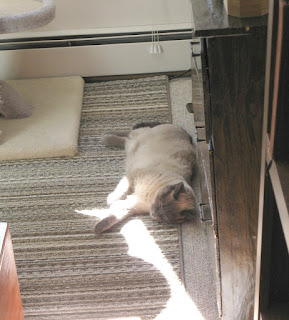