A Little Night Music This Morning

I caught Nocturne this morning. I had seen him earlier this week, but failed to catch him Tuesday or Wednesday, when he appeared to have been absent, anyway. I saw him this morning. He isn’t too timid to feed with the other cats, but seems to prefer the easy pickings, the dish on the ground, rather than on a table, the food no one else is currently eating rather than the crowded buffet. I therefore set the traps a little apart from the other food. I also knew that Nocturne sometimes comes back to eat after leaving, so the traps remained baited and open. 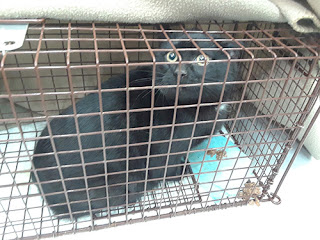 He didn’t disappoint me, however much breakfast may have disappointed him.

Nocturne is, so far as I know, the last of Bauble’s kittens needing to be sterilised, the last cat in the colony needing to be trapped. There is always the chance that I have missed someone, or another cat, new to the neighbourhood, is right now having kittens, or some feckless human is thinking of abandoning cats near us. But for now, we have achieved a finale. Operation Mini-Raffles is ended. 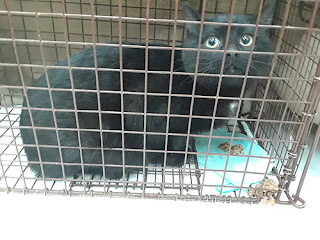