But Am I Lucky?

Napoleon I, Emperor of the French, is not one of my favourite personalities from history. But he was undoubtedly a leader of men, and he knew the qualities other men needed for leadership. He would often review army officers’ records himself when promotions were considered; once, when other members of the promotions board were extolling the virtues of one particular officer, Napoleon asked a pertinent question: “Is he lucky?”

Napoleon knew that some people are simply luckier than others. Like Gladstone Gander, in Donald Duck comic-books, some have good luck all the time; some have it once in a while, over a period of a day or a week; others possess it when doing certain things. I consider myself very lucky in my trapping-and-neutering operations, especially in the recent Operation Mini-Raffles.

I realised how lucky I’d been when trying to comfort a terrified Nocturne who was spending the night at my apartment to make sure of his recovery. (I was unsuccessful in reducing his terror.) I thought about my recent activities.

I caught Nocturne’s sister, tortoiseshell Sonata, the first of Bauble’s kittens, on a Monday. I sent a message to that effect to my contact in the group that facilitates the neutering and spaying. I was told that the veterinary would be able to take Sonata the next day. That was unusual: the doctor with whom we work is normally able to take one of my prisoners the same day. I learned later that he now is closed on Mondays, but works Sundays. (I find that strange, but perhaps he has tumbled to something that provides him with more custom; if so, more power to him.) In any case, it meant keeping Sonata another day. And, since I keep a newly fixed cat over-night and release it the next day (as in Nocturne’s case), Sonata would not be freed until Wednesday. In the meantime, the trapping continued.

Wednesday morning, I was surprised to trap another tortoiseshell, Sonata’s sister, whom I named Serenade. Later, seeing their photographs together, their difference was obvious: one was a light tortoiseshell, the other dark. But had I released Sonata on Tuesday, as I would normally have done, I would not have recognised Serenade as another cat; I had not thought there were two tortoiseshells in the litter. I therefore would have let Serenade go, thinking that I had caught Sonata again. Only the knowledge that Sonata was still caged in my apartment allowed me to see Serenade as a different cat, and prevented me from inadvertently letting an unsterilized female cat back into the colony.

Furthermore, I would never have known the source of all the kittens that would have indubitably resulted from such a mistake, since I would not have realised that there were two tortoiseshells; thus, the possibility that I had captured two and let one go unfixed would not have occurred to me. Even had I seen the two sisters together, I probably would have thought one was Fanta, a slightly older tortoiseshell caught and spayed last year. So I would have had no notion of who to catch to stop the multiplication of litters in the future.

It was the sheerest luck that the veterinary changed his schedule, disarranging my plans in a minor way - at the moment that they needed disarranging. I have been lucky in catching other cats, but these instances have been influenced also by circumstances, the process of elimination, and, as in Nocturne’s case, having a feeling about how he would behave in a situation stacked against him. Sonata and Serenade’s case was nothing but luck.

Of course, I still may have missed a kitten. I and my colleague who manages the community colony have not seen any other smallish cat, who might be a kitten. We had feared Bauble was pregnant when, in fact, she was, but have seen no other cat who could be expecting, and know of no other cat in the colony who is not fixed. Yet I could still have missed a kitten. However, I don’t think so. I think Mini-Raffles concludes a chapter in my trapping operations. I am under no illusions regarding the future. One new cat, straying into the neighbourhood, could initiate yet another long campaign of sterilization. But for now, I can rest.

So what would Napoleon think of my luck? Well, my luck isn’t so great in any other field that I would be promoted swiftly in the French Army. But I might be posted to look after the imperial clowder. If I were lucky. 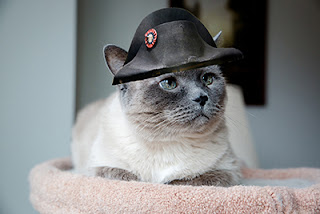