Renn’s recovery from his surgery – or, rather, I think, from the pain-killer that was given to him after it – is slow. He has been more responsive today, purring when I petted him, and less lethargic; one may see in the photograph below that he is a bit more reactive to his surroundings.

He has eaten a very little; enough, I believe, to stave off the disastrous effects that come from a cat not eating for a few days, but not really enough to keep himself fed. I won’t force-feed him, as that would be very stressful, and I rely on that only in extreme cases of a refusal or inability to eat anything. Even so, the length of his inappetence is worrisome. It is also annoying: a drug beneficial in controlling pain should not, in my opinion, occasion possible disfunction in another aspect of recovery or, indeed, survival.

But I don’t doubt that my big boy will recover fully. It will take time, more than it should after a surgery, even one as complicated as that that he experienced. I suspect that the veterinary who usually deals with my cats would have at least explained to me the new drug that was used, if not discussed it beforehand. As in other instances, I continue to learn about caring for my cats. I just wish that my cats didn’t have to pay for my tuition. 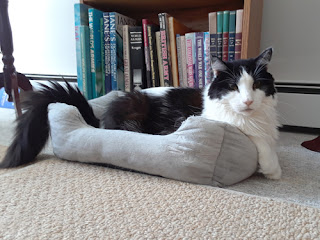