Renn went for his dental yesterday, and also to have an x-ray taken of his lungs. The good news is that the x-ray revealed no scars due to asthma, so my big boy doesn’t have that. He still has coughing fits that don’t seem connected to hairballs, but they are not because of asthma. Also good is that Renn had the problems in his teeth and mouth solved. Four teeth were removed, including two that were being resorbed below the gum line. X-rays were required in this case, too, to see these.

The bad news is that Renn’s reaction to this surgery is quite a bit different than on previous occasions. He is extremely lethargic, leaving his cat-bed only to use the litter-box, where his feces are almost liquid. He has not eaten or drunk since having to fast, starting at ten o’clock Wednesday night. After his previous surgery, which also removed some teeth, Renn ate a good meal upon coming home: he was hungry and still on the pain medication. He slept but was not almost unresponsive, as he is now. I did not expect the same reaction as the last time, but at least something similar.

However, I spoke to the doctor who operated on Renn; she is not our usual veterinary; a dental is, while not without hazards, somewhat of a routine procedure, and I did not feel that a familiar surgeon was necessary. A new pain medication was used, a slow-release buprenorphine, which is to numb pain for three days. This makes the patient very sleepy. The effect on his litter-box deposits is due to the anaesthetic. The doctor told me that it should be safe to let Renn go without food until early Saturday.

While the new pain-killer may be effective, and obviate the need to administer any kind of relief myself, I don’t really care for the strength of this drug’s side-effects. I have better control over the use of the older drugs, and fear of Renn not eating for too long under their influence was lessened. I don’t know if I would sanction the use of this buprenorphine again, especially as all of my cats are now seniors. I have learned that, though doctors may know what they are talking about, I know my cats, and when something doesn’t feel right with them, then I must question what is done.

But I am nonetheless reassured by my conversation with the doctor, and will give Renn whatever time he requires to recover. Hopefully, my big boy will be himself again over the weekend. 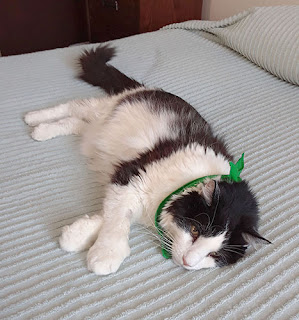