A number of readers of this blog have expressed kind wishes for Renn’s improvement. I am most gratified by these statements, and I want to thank everyone for them. I have the gladness to report that my big boy is better this morning. Since waking, he has, in small portions, eaten almost a whole tin of Fancy Feast, which is more than he would eat over an even longer time-period on his best days. This is, of course, merely making up for lost time: he is feeling the empty stomach caused by several days without food.

Inspired by Jackie’s sad comment that Flynn’s decline was begun by an unauthorised injection of Convenia, I have decided to tell my veterinary hospital not only not to give the slow-release buprenorphine to any of my cats, but also to receive my permission before using anything on them that has not been used before. I have no idea what may be available that a veterinary might think appropriate the use of which I might refuse.

I don’t think the new drug will have a lasting effect on Renn, but it may have proven dangerous to him in the short-term, too. It doesn’t take much to affect a body and mind, but I believe my big boy will pass through this ordeal and emerge from it in health reasonable for a mancat of his age. 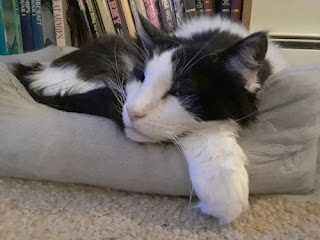