My Day of Remembering III

Today is, once more, my Day of Remembering. Rather than commemorate my lost cats on the separate anniversaries of their deaths, I do so on this day, which is the day I lost Bear-Bear. And instead of recalling everything about them, I will write of one aspect of their wonderful characters that I remember, and which says something about them.

Bear-Bear was the first cat I lost. He died on February 25th, 2014. He was a long, slender fellow and loved people. One wouldn’t think that such a wiry animal would do well on laps, but he did, and he enjoyed being on them very much. The day he died, his cancer having advanced too far to keep him from pain, he struggled out of his cat-bed and walked slowly over to where I sat. He couldn’t jump anymore, so I lifted him up. Then, at the veterinary hospital, just before he died, he indicated that he wanted to be on my lap. And that’s where he was when he left me. He and I had been friends for less than a year. 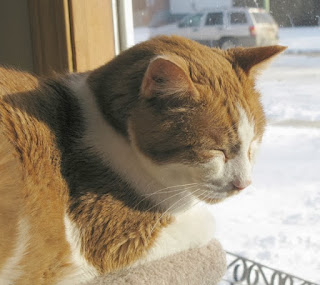 Tungsten was my first cat, and the second to leave. What I recall about her at this moment was her activity. She was estimated to be about seven when she came to live with me, but she was still quite lively. She astounded me by jumping five feet straight up, when she wanted to reach the top of a cabinet from the floor. She would leap from the bed without hesitation, and liked to zoom through the nylon tunnel. She would time her run for when I walked past the tunnel so that she would shoot out the other end as I reached it. Tungsten grew old before her time, and died on March 26th, 2015. But she was young once, and vital. 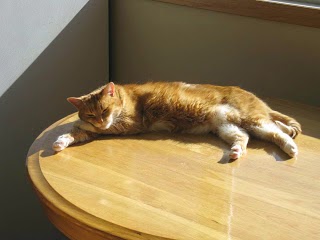 Parker, my sturdy-boy, was a foster-cat, like Bear-Bear and, also like the BB and Tungsten, orange and white. I can’t mention my friend Puck without writing about how he was an outdoorsman. He loved going outside on his harness and leash. He would start purring whenever I brought it out, and scratch at the door with impatience. His joy at being outside was expressed in his words: he talked while walking along a sidewalk, sniffing the air; he liked to tell everyone that he was outside, having fun. He died on June 2nd, 2019. But If any cat would appreciate the fields of Elysium, it is Parker. 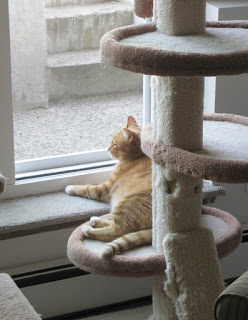 Since this day last year, I have lost three of my roommates, half of my feline population, two of them on the same day. May 15th, 2020, was a hard day for me.

Raleigh was dying, and I had scheduled his final appointment with the veterinary for that morning. Raleigh was a sweet-natured fellow. He had no animosity or hostility in him. But something else about him I remember is what he did when he was hungry, or when food was in the offing. He would scratch at the corner of wooden furniture. I thought it a very specific gesture: never on plastic, never on the face of something; wooden corners only. His big polydactyl mittens scratching away in eager anticipation will always stay with me. 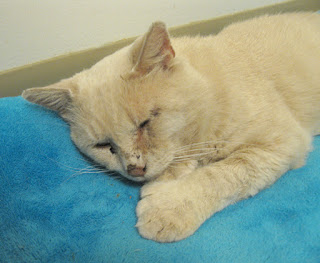 Cammie had had a stroke a year before, and had gone blind. She adapted astonishingly well to her handicap and was living decently. I think she enjoyed her purry times lying on my chest, and sniffing the outside air through the window screens, and snoozing in her heated bed. But on May 14th, 2020, my princess had another stroke. There was no swift recovery from this one; for a cat, already advanced in years, a slow, painful recovery is hardly recovery at all. I said good-bye to her the next day. What I remember about Cammie was how sudden she was to end an activity. Whether it was eating or receiving pets on her fuzzy head, it would end abruptly, often with a scratchy grunt of “runh”. She enjoyed her moments, but when she was done, she was done, and there was no continuing. She was indeed my princess. On February 17th, 2021, my Chubs, Josie, died. I have already written at length, and recently, about my old lady. What stands out when I think about her right now is how she grew increasingly deaf with time, so that whenever she saw me, it struck her as a surprise, and she would give a little jump. I tried to warn her that I was approaching or already near, but how does one warn a practically deaf cat without startling her? If I touched her, it would produce the same reaction. She could even know I was in the room and be surprised when she saw me again. It may have taken a slight toll on her, but I couldn’t help smiling at it. It was like a running gag in a tv situation comedy. Despite her departure, the Great White makes me smile. 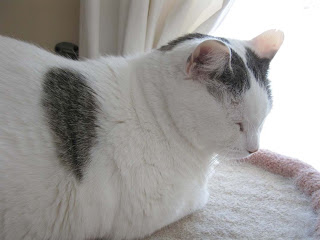 These are the cats I have cared for and lost. They have gone on ahead and, I hope, are waiting for me. I hope too that they remember me, because I will always remember them.