While Renn and I work to make him feel better, we can’t neglect the outsider-cats.

I have five coming to visit the food- and water-bowls at Café Cosy now. The most frequent visits are from Sable and Arliss. Sable is all black, with the rim of her right ear white. This may indicate frost bite damage. I don’t recall seeing it last winter, but that doesn’t mean it wasn’t there. She looks healthy and strong, and was spayed years before in a community effort. She used to be inseparable from her sister, Sablette. The latter girl, shyer and a little smaller, disappeared last year. 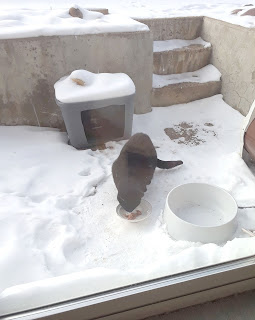 Arliss is a bulky orange and white fellow. Very timid at first, he is slowly becoming accustomed to me. No longer will he trot away just because he sees me looking at him eat. I often watch him, let him see me watching him, then walk away, so that he knows my primary interest is not his capture. I hope this makes him feel that my presence doesn’t mean danger to him. I believe he knows that I am responsible for the food, or at least associated with it. 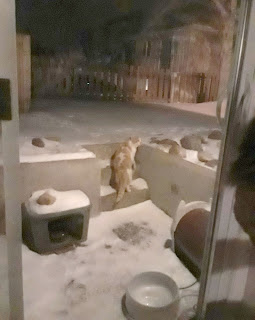 Stygia is a very shy tortoiseshell cat. She will run, swiftly, if she notices that she is under observation. She has a distinctive white bib and, possibly, chest, which I don’t see much in tortoiseshell cats. 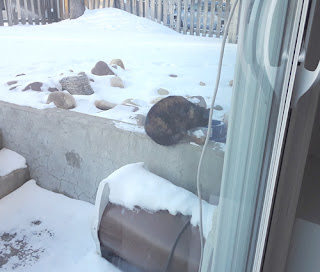 Then there are two others. Beaumont - who may be the Cecil of several years ago - is a large tabby and white boy who is both nonchalant and fussy. He rarely bothers with the hard-food bowl, but comes to check out what’s on the menu in the way of soft-food. If there is no soft, he won’t waste his time with the hard; this tells me that he has other sources of food, clearly superior in his mind to what I have to offer. I haven’t been able to take a recent picture of him.

The newest cat I have seen only once - and may not seen again, as is the way with outsider-cats. I have named him Enoch; in the artificial light that brightened the side of my building one night recently, I saw a pale-furred fellow with nothing more than a knob for a tail. I hope he found Café Cosy to his liking, and will return.

Sable I know has no home; the others may. She is also the only one whom I know to be fixed. I would like to invite them all in, but they will have to remain outside. At least they know where to come for a good meal, clean water and, if they want, shelter in the still unused cylinder-cat-house. The management of Café Cosy extends its welcome. 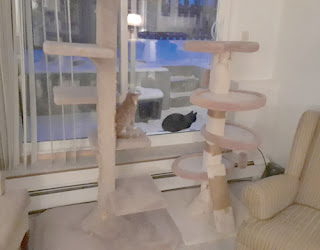