A Report from Xanadu

Xanadu’s introduction to the perma-cats did not go as well as I had hoped. Neville wants less to do with him than he did with the Felons. Tucker hisses and growls at him, and even Renn doesn’t want him around. (Josie is quite frail these days, and I don’t want to give her stress by adding a new cat to her world.)

The youngster doesn’t help the situation by running at his elders. He made a leap at my big boy that I interrupted in mid-air. Had he landed, the results would not have been pretty. Xanadu is simply trying to play, but the residents don’t know that. I will be re-evaluating how I integrate them all.

In the meantime, Xan is released into the apartment with the others put away, similar to the arrangement the Felons had. Xanadu is a true kitten, rushing about, climbing as if falling meant nothing and wrestling with the nylon tunnel. I hope to have video of the latter available to watch soon.

I also spend time with him when I can. Movie-night gives me a couple of hours with him; he has used it so far to beg popcorn for an hour, explore the back of the television set for half an hour and resting, sort of, for the remainder of the time. And he has his own version of television, watching the birds out the library window. The winged creatures fascinate him, and neither food nor the offer of freedom in the wider apartment breaks his concentration. 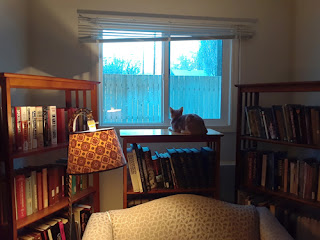 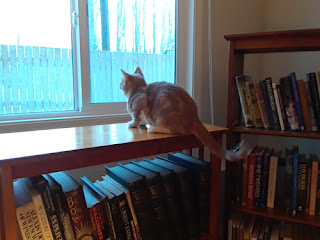 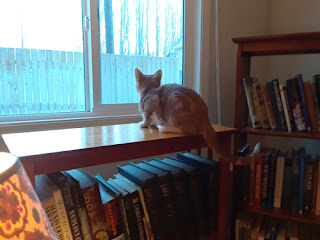 His best adoption would be to a home in which he would have a similarly aged playmate, though he would do well as an only-cat, if his new people were attentive and able to give him plenty of time. He is a sweet-tempered little fellow, curious, and full of adventure. Despite his sequestration for most of the day – certainly while I am at work – he remains happy, purring very easily and kneading with his paws. He is an older kitten at its best. 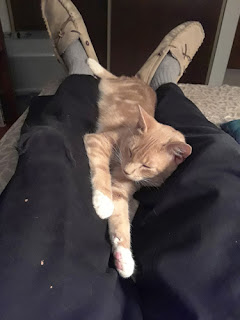 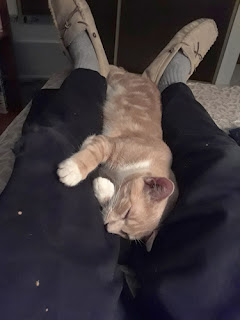