Not yet September, the weather has nonetheless turned cooler, though this is a relative description. The diurnal temperatures are very pleasant, while the nocturnal are not much lower than normal for this time of year. Even so, it is a change, and the cats have obviously felt it.

While the beasts are still haunting their usual spots, there is a general shift toward the cosier locations in the Cosy Apartment. Portia still lies on the carpet in the sitting room, but she has taken to snoozing in armchairs more often. 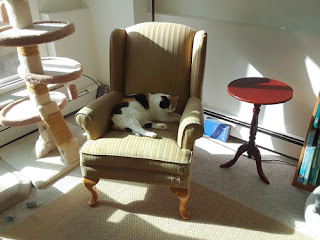 Neville, despite his long fur, has sensed the approaching end of summer and is more often seen in the high-sided cat-bed in the sitting room. 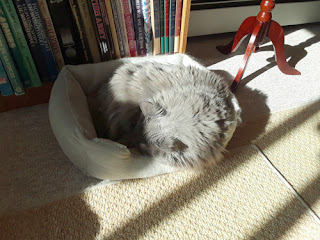 Tucker has decided that, in addition to the cat-bed under the micro-wave oven stand, the soft hammock between two tall bookcases is a snug place in which to rest. 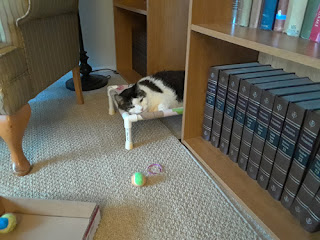 Yes, there is that indefinable difference in the air now. The sky is the same blue as it was last week, the leaves still green, and the sun still strong. But each is marginally less vibrant, minutely blander. The autumn with its mellow tints, thinner sunlight, and air that is both crisper and softer, is almost upon us, and the cats here are behaving accordingly. Except for Renn, who ruins the subject of this entry by doing nothing different at all. 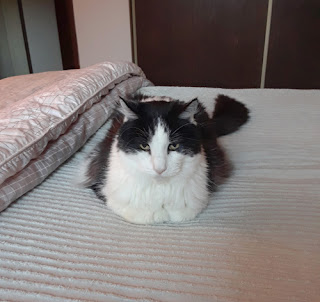