Upset on the Weekend

Saturday, my big boy, Renn, started throwing up. He couldn’t keep anything down, and eventually refused food, either because he was feeling nauseous or he believed he would throw it up anyway. Sunday, he ate, but brought that back up. He hasn’t been eating as much as he should anyway, so this worried me considerably.

Fortunately, the last time Tucker went to the veterinary hospital, he was given a couple of Cerenia tablets. His appetite had been diminishing and he was given some Cerenia to calm a possibly queasy stomach, along with some Mirtazapine to stimulate his hunger. The roly poly recovered as well as I could expect, given his other health problems, so I did not need to use the second Cerenia pill he was provided. I decided to give some to Renn.

I hadn’t had to force a pill into Renn for years. I can’t remember the last time I did it. I gave him but a quarter of a pill (the same amount Tucker was prescribed); the big boy was surprisingly coöperative. I waited three hours, then followed it with a syringe of water-and-Recovery. I let him be thereafter.

Renn did not throw up during the night. This morning, he was more alert than he had been yesterday, and ate three, albeit small, helpings of Recovery, which I chose to feed him for the nutritional value and because it seems easier on upset stomachs than other cat-food. I did not want to give him too much, but when he asked for some hard-food, it was hard to resist the fact that he - and his body - wanted to eat. I gave him some kernels.

I now will see what awaits me when I return home this afternoon. The Cerenia’s effects are meant to last a day, so even if Renn is still sick, he may keep down what he ate this morning. I don’t know what was wrong with him, but hope it is something passing. He is feeling the effects of age, and there may be something else at work in him. I will of course take him to the doctor if need be, but that in itself is a contribution to ill-ease, so I will avoid that if I can. Right now, that is up to Renn, and his stomach. 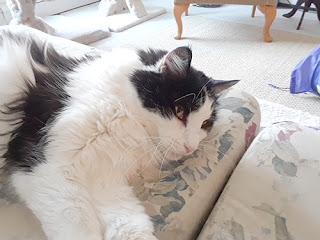