A Parting Gift from Tucker

As readers may recall, I purchased a small, plastic stool for Tucker to use in what turned out to be his last months. It was to help him ascend to his favourite chair at the dining table, and very useful it was, too. But it is strictly utilitarian, and not very attractive. I have, since Tucker’s death, placed it against the ottoman in the library. Because Renn uses the stairs to the bed and those to the sitting room couch, I thought he might benefit from an easier access to the library sofa. He did not used it. 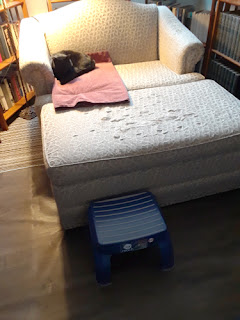 At the back of my apartment building’s ground floor, on the landing of the rear staircase, is a spot where tenants may place items which are usable but no longer wanted by the owner. These include non-perishable food, slightly used clothes, dishes and even small pieces of furniture. I have left objects myself and have, in turn, taken in items. Yesterday, I found this tiny stool – a tuffet, as I prefer to term it - at the recycling spot in my building. 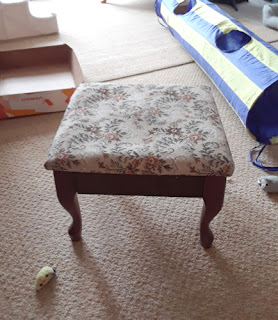 With its heavy wood construction and upholstered seat, it looks much more attractive than the plastic item; I replaced the plastic stool with this new (to me) tuffet. Remarkable to relate, both Renn and Hector have used it already. Sort of. I caught them not stepping on it to reach the ottoman, but sitting and lying on it, as if it were another chair. Well, whatever they see its purpose as, at least they have given it one. 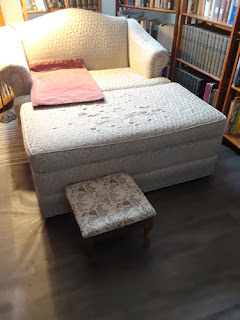 I wish Tucker had had the opportunity to use it. I think he would have liked it. But in his honour, I will call it Tucker’s Tuffet, since I would not have bought the first, utilitarian, stool if not for him, and I would not have replaced it with this. I like to think of it as his going-away present to his roommates. A final gift from my roly poly.