I will publish a memorial post to Tucker soon; it takes a while to sift through more than a decade of memories, most of them very good. I also intend to thank each and all those whose kind condolences were left on my blog; that may take a while, too.

In the meantime, Tucker’s absence, of only a day, has been deeply felt. Foremost so far, was his absence at dinner last evening. Every time I began to prepare a meal, the roly poly would come out to see what was on the menu, and generally keep me company. When the food was ready, he would already be in his place, on one of the cushioned chairs at the table. He would sit up, confident in the hope – always fulfilled – of having a bit from my dish. Even when he was sick, he would totter out and slowly climb to his spot.

Last night, no one came to join me. The other beasts were, as they always were at that time, snoozing, having had their dinner an hour or so before. There was no conversation that usually brightened the event, nobody to whom to offer food. For the first time in more than a decade, I ate all of my food myself. That evening, it seemed just a morsel or two too much. 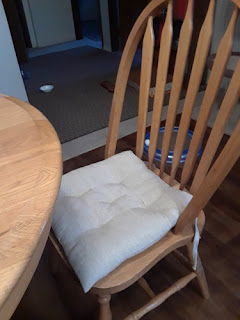