Today was a satisfactory day. It started with not going to work. Today was a holiday, a delayed New Year’s Day, because the first of January fell on a Saturday. An extra day off is always welcome.

So is an improvement in a cat’s health. Renn is feeling better. He is eating quite well, certainly as well as he had done previous to his recent illness. There’s a possibility that he was allergic to a new variety of hard-food I was trying on the beasts. My big boy was the only one who really took to it; his vomiting did not start immediately upon eating the new fare, though soft, even liquidy stools preceded the puking by a couple of weeks.

I stopped feeding him the new food, which disappointed Renn. He did not want to eat any other hard-food, even though he had enjoyed Orijen’s Regional Red variety at one time. As described in an earlier blog-entry, it took some work for him to recover from his sickness. For a few days, he has been eating admirable quantities of soft-food. Today, he at last partook of the Orijen hard-food once more. That variety I know doesn’t cause any difficulties, so I am pleased at this development. Furthermore, during the night, three loads of solid waste were deposited; they were all firm. Since it's likely that each cat made one, it means that Renn has recovered on that end, too. 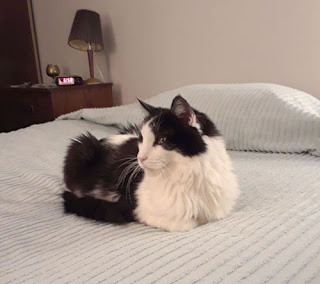 Hector has been trying to fill in for Tucker as best he can. He not only likes to see what’s for dinner, but he comes over to rub up against me quite often. I prefer to think it’s because he likes me, rather than that he’s looking for food. He is quite different than my roly poly, of course, but the latter seems to have left some instructions for the boy on how to behave, when he does behave.

On that subject, I was able to cut a paw-full of Hector’s claws today. I did that when he first arrived but that was, I believe, simply because he didn’t know what I was doing. He may never have had his claws cut; he isn’t so much bothered by having his feet or toes touched as feeling the clipper enclose his claw. I was glad to be able to get one paw done; I will try the other another day. 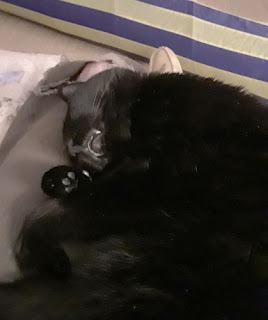 And Neville sought me out in the mid-afternoon for some chin-rubs. I was on the computer and the Nevsky jumped up on the bed and lie down close to me. That’s his signal. I rubbed his chin for about twenty minutes, until he became carried away and tried to nip me. That’s a signal, too… 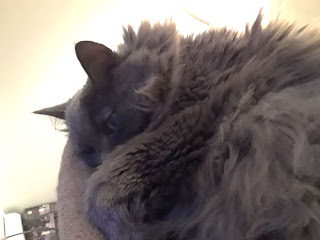 And finally, Sable came by at about one o’clock. She may do that when I am at work, but this time, I was able to provide her with soft-food, rather than her resorting to the hard-food that is always kept stocked outside. She was hungry, too, tucking away two full tins of Fancy Feast. I was able to get a good look at her in daylight; she appears in good shape, rounder than she was when she first returned after her most recent prolonged absence.

(Not part of today, but related to it: we had quite a wind-storm a few nights ago. Sable almost never appears during windy nights, but she must have been hungry this night. When I saw her, I hurried to prepare some food for her, but she was gone when I returned with it. A quarter-hour later, she reappeared, though when I brought her dish, she had again retreated, though going only so far as a near by fence. I called to her and she came back to eat. She didn’t wait for seconds, however, as she often does. I think she is spooked by the wind, and came out that evening only because of her empty stomach. I am happy that she knows she can come to Café Cosy for some decent food.)

My day was, as may be seen, most satisfactory, if episodic. Tomorrow, I go back to work. The holidays are over, though Christmas has a few more days to run. It was an eventful period but, as the Bard wrote, all’s well that ends well. And today ended the holidays quite well indeed.