While Auric settles in, life goes on at the Cosy Apartment. Renn is preparing for his veterinary appointment and Hector, well, he continues to be Hector. And Neville can be counted on to provide entertainment, usually with the minimum of effort.

On the weekend, I was in the sitting room reading, listening to music. I heard a garbled muttering, coming from the bedroom. I knew who it was, of course: Neville was talking. 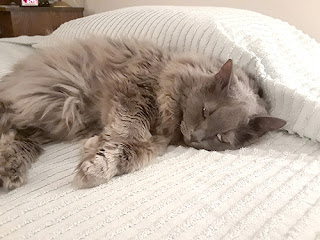 But I’ve heard him talk only at meal-times, when his food is approaching, or, more rarely, during his actual consumption of the fare. But it was not a meal-time.

I walked into the bedroom, asking what on Earth he was talking about. There was the Nevsky, on his back on the bed, his front legs in the air, his eyes open but rolled back - asleep.

I watched him for twenty seconds but at last started laughing. This woke him, and he slowly turned his head to wonder why I had woken him and, more seriously, why I had been listening to a private conversation. 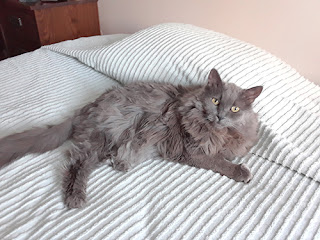 I’ve seen cats twitch and start in their sleep; eyes flit and limbs flick. This is the first time I’ve heard and seen a cat talk in his sleep. Since Nev talks when he’s awake only at meal-times, was he somnolently anticipating tasty fare being brought to his table? Are there other reasons for his vocalizations that I haven’t discovered? That are heard only when he’s asleep?

Whatever the cause, Neville once again entertained - with the minimum of effort. 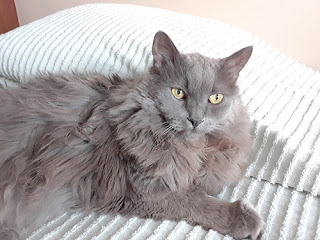