The Battle of Renn

When we last left Renn on Sunday, he was doing very well, with no signs of his recent illness. Tuesday started nicely, with my big boy eating decently until after dinner. He had no interest in food at snack-time, and threw up just after eleven o’clock that night. Since he had not eaten anything, he regurgitated only the water he had drunk half an hour previously. I was grateful for that, as it meant that his dinner had stayed down.

The next morning, Renn finished off a small amount of breakfast but brought that up almost immediately. Before I went to work, I gave him some Cerenia to calm his stomach, and when I returned in the afternoon, could find no evidence of upchucking. He did not want to eat that evening, though he nibbled some Fancy Feast, anyway. He drooled and was continually swallowing later in the night, and burped often, but kept everything down.

Thursday began better, as my boy looked forward to some food, though he didn’t consume much. I decided against giving him Cerenia, which proved an error. That night, he threw up again.

Well, there wasn’t going to be any more fooling around. Before we went to bed Thursday night, I put some Cerenia into him, and determined to do so for at least another two nights. Friday morning dawned with no breakfast for Renn: it was offered but not partaken. He didn’t vomit while I was at work, but ate a little dinner. But that was not enough for me. I not only syringe-fed him some Recovery but gave him sub-cutaneous fluids, to put in him some of the water he had brought up, and to provide for the water that he simply wasn’t drinking.

Today, the no-nonsense continues. Renn hates receiving sub-cutaneous fluids, but he was given some more today regardless, and is getting syringe-fed, even though he has eaten on his own. He hasn’t puked today (or yesterday) but he’ll get one more dose of Cerenia this evening, and will continue to have his diet supplemented by syringe. I don’t intend to change this course tomorrow.

My boy goes to the doctor on Wednesday. I have four more quarter-pills of Cerenia on hand, if needed, and I will add to his meager fare by force, if that too is necessary, and want to give him another sixty milliliters of fluids on the morrow. I believe he had a solid poop yesterday, though I don’t know for certain. In any case, I won’t relax my vigilance until we go to the hospital, and hear what the veterinary has to say. I don’t know what Renn has but it won't get the better of us. 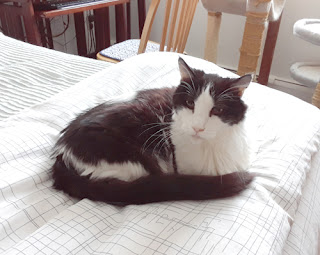