Two for the Doctor

Renn and Auric had their veterinary appointments yesterday. The results are mostly good.

It turns out that I was half-right about Auric: he’s a boy, but is not neutered. He does have an upper respiratory infection, but is receiving medicine for that. The doctor figures it will be cleared up in about a week to ten days. I was told that he will always have the infection (I think it is viral) but that it will stay dormant until times of stress. He also had ear-mites and was treated for them. He did not like that, receiving a squirt of liquid in each ear. But the ear-mites liked it even less, so it’s working.

Auric’s heart and lungs sound very good and, though he has lost a few of his small front teeth, the rest are in excellent shape. I saw that they are bright and white, and the doctor aged my new cat at about ten to twelve months. 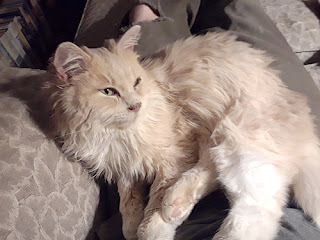 I made an appointment for him to see the doctor again in a week’s time, though that may be too soon, and the infection may need a few more days than that. But in about a fortnight, the Golden Boy will receive his vaccinations, be neutered and stand ready to join the other beasts in the Cosy Apartment.

As for Renn, he probably has irritable bowel disease. Blood and urine show that his kidneys are in stage two failure, which means they have not worsened in two and a half years, since his last tests. The doctor prescribed a special gastro-intestinal food, with Fortiflora pro-biotic added. I don’t know that Renn will like that fare. If he doesn’t, there is a reserve plan, first involving Metronidazole, and then, if necessary, Prednisolone; we will try the food first. There is a chance that my big boy has gastro-intestinal lymphoma, and, while that cannot be cured with drugs, Prednisolone can help make him comfortable. The possibility of lymphoma is less likely than i.b.d.

Conditions were diagnosed, medicines and treatments dispensed, and the patients returned to the Cosy Apartment tired but relieved. We all had a good night’s sleep. 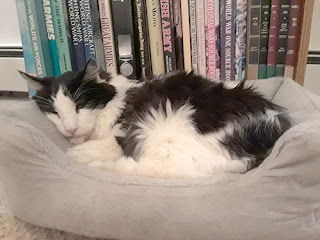