Some may recall, though it was five years ago now, that I published a picture of Tucker that made me think of him in the rôle of a Mob boss. I dubbed my roly poly ‘the Catfather’, on the basis of the image. 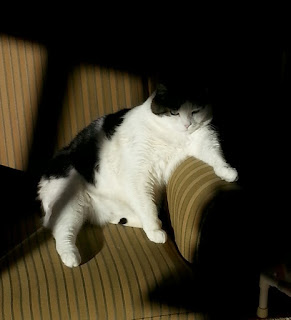 I suspect the title had been used before, perhaps many times, but I found it amusing. It fit in with a series of stories being written by the Trout Towne Tabbies (see the link on my side-bar), called the ‘Coddmother Saga’, and the Food Service Girl in Trout Towne asked if she could include Tucker, in his Mob guise, in the saga. Permission was granted and I laughed over the blog-entries that resulted.

When Tucker died, I received a gift certificate, in honour of my Tuxter. It took a while for me to determine on the right purchase with the certificate; I wanted it to be in memory of Tucker, and something unique to him. I found an artist who reproduces images of pets as royalty or aristocracy, and asked her to create a portrait of Tucker with the suitable addition of garb.

This is the result – though a photograph does not do it justice (click on the picture to enlarge it.) Below it is the picture from which Tucker’s likeness was taken. 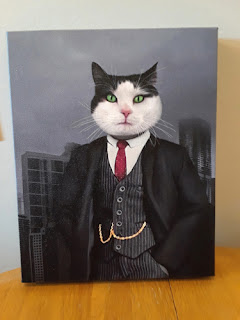 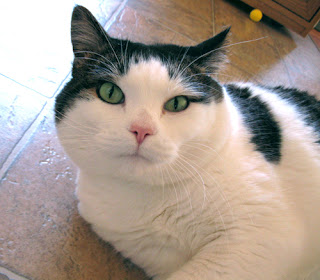 My Tucker had many sides to him. I will remember him as the baby of the family, the roly poly, my constant dinner companion – and as the Catfather, now immortalised on canvas.