Minuet is doing all right. I woke in the middle of the night and went to the bathroom where she was sleeping, and found that she had wet on the floor. I thought this strange, as she had, hitherto, used the litter-box without exception. I had previously noted that the amount of litter was diminishing and had planned to renew it in the morning. I did so at that moment, instead. She has since resumed using the litter-box. 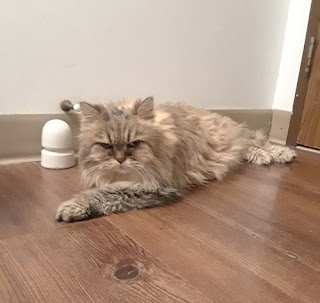 Why Minuet needed more litter, if that indeed was the solution to her temporary lapse, I don’t know. Perhaps the Cat-Attract loses its effectiveness after a while, though I would not have thought a mere twenty-four hours would have been the limit. There are, of course, any number of possible reasons, though I intend not to add to the litter tonight, to see if the episode is repeated. If it is, perhaps a thin layer on top will suffice.

My other newcomer, Auric, is making slow progress in the right direction. Slow progress. Since his neutering, he has calmed down a little. A little. He sleeps more, which is a blessing to us all. 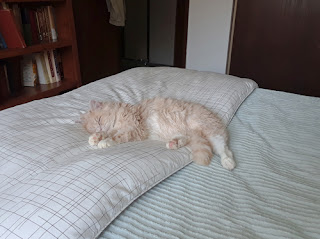 He continues to chase Hector, and this remains his biggest problem. He seems to bother Neville not much at all, while his attention toward Renn appears – and appearances may be quite wrong – to be those of a youngster looking for an older brother. He will try to lie near my big boy now and then; Renn wants nothing to do with this relationship, but is not as hostile to Auric’s proximity as he once was. 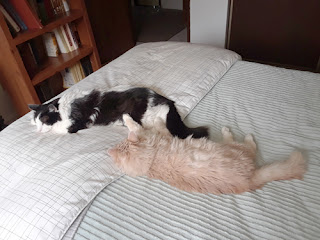 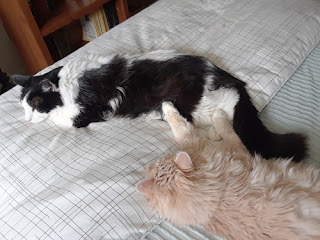 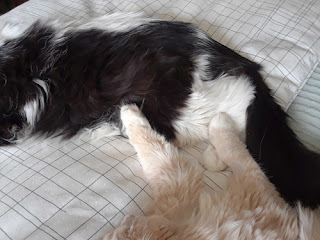 Auric is nonetheless a mischievous kitten in spirit, and I can’t yet leave him out with the others while I am asleep or absent. He will stay in the bedroom during my work-day, while Minuet is given the library. This will greatly restrict the space for the others, but they will have to live with it. At least they won’t have to live with Auric’s antics. 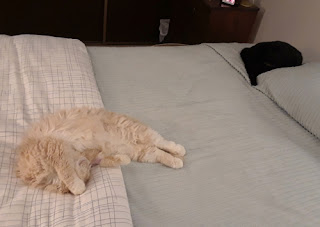 But the Golden Boy does have a charming side. I have learned that he enjoys extreme physical closeness if I am horizontal. My attempts at a nap today were ruined by Auric deciding that he would re-enact a part from a movie. Do you recall the scene in Alien in which John Hurt’s character is attacked by the hatchling from the egg? It attaches itself immovably to his face. That scene apparently found favour with Auric. 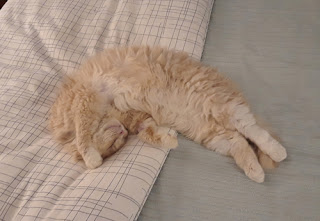 What is needed is the patience which I counsel others in this situation to have. With time, my two latest houseguests will integrate well. I think a decade or two should do.