Auric had a busy Saturday – for someone cooped up in one room until his quarantine ends. He spent much time playing. I brought him the sea-turtle toy. Unbeknownst to me, it had catnip in it. Now, catnip and I have had an ambiguous relationship since I realised that it made my first cat, Tungsten, surly and irritable. I generally keep it away from my beasts. But Auric, who has little to do while in the Cosy Apartment’s isolation ward, seemed to enjoy the toy. 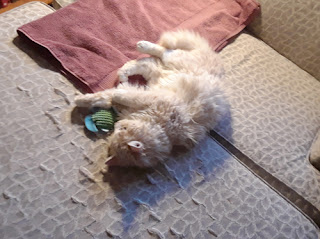 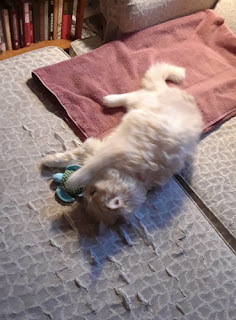 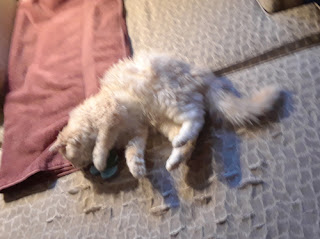 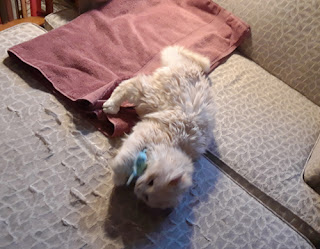 He wrestled and fought, knocked and chased the sea-turtle, and had a great deal of fun. The catnip did affect him, however. Last night was movie-night, and while I watched the film, Golden Boy lie against me. He didn’t cuddle with me as usual, didn’t try to get close. He was friendly but gone was his habitual purr. Not a sound came from him all night. He did take an interest in the evening’s film, though. 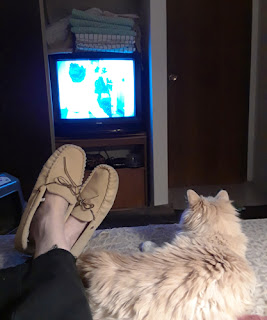 The next day, when the effects of the catnip appeared to have waned, he was once again a snuggly fellow and his purr was deep, loud and constant. He was, evidently, pleased by the previous night’s activities, but just as pleased to have my company once more in the morning. 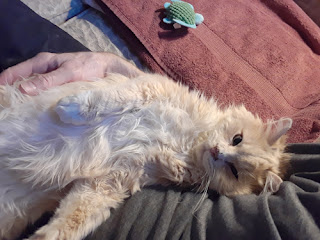