In the 1860s, Burnand and Sullivan premiered their stage farce Cox and Box, about two lodgers who are rented the same room by a landlord. One tenant works during the day and one during the night; when one is in, the other is out, and they are long unaware of the landlord’s chicanery. It’s a play that is still quite popular. I know that because it’s occurring in the Cosy Apartment, though it’s not as funny on my stage.

I came home yesterday hoping to find that Neville had continued to improve. He had. His behaviour was good and he was ready for some food. But someone had thrown up during my absence. I could tell from the colour and location of the refuse that it had been Renn.

Renn continued to be sick all night, throwing up so much that he was eventually vomiting reddish bile. At last his stomach quit revolting, and I was able to to put into him a dose of Cerenia, with as little water as was necessary to dissolve it in the syringe; I didn’t want the water causing a renewal of his vomiting. For a while, it seemed that he would chuck that up, too, but it stayed down, and he was calm and even in good spirits by bedtime. He was not unwell during the night and even ate a few kernels of food this morning.

Though it seems as if we are seesawing from my big boy to the Nevsky and back again, I hope that, at the least, the latter’s problems were an aberration. Renn, I perceive, is my bigger worry. I think the Cerenia helps him, but he can’t be on that drug forever. I am researching irritable bowel syndrome in cats, and have a call in to Renn’s doctor, to discuss another, possibly more promising medicine.

In the meantime, I hope to be writing about things other than sickness and puke. I think that will be a welcome change for both author and readers. 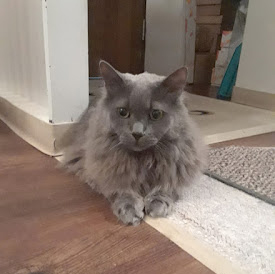 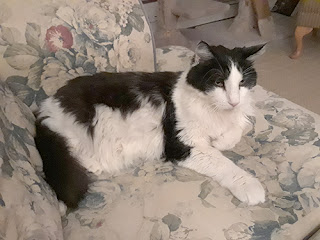