Keep Him Calm and Peaceful, They Say

Auric’s surgery went very well. He is now neutered. His ears were examined and cleaned, and his chest and the under-side of his neck shaved, eliminating all the small, tight mats he had there. He was glad to come back to the Cosy Apartment, I think.

The normal instructions of the veterinary are to keep the newly neutered cat calm and resting. That couldn’t apply to Auric. He was filled with energy. I spent time with him and, though he enjoyed some cuddling, he wanted to be on the move. When I left him, I could hear him banging about the library, chasing his fuzzy mouse and foamy sea-turtle. I later joined him and used the string-toy to try to keep him in one place while playing. That worked, but when I left again, taking his toys, he resumed his exuberant action. It turned out that, deprived of mouse and turtle, he was pursuing bits of fuzz from the scratching post. His operation, far from reducing his energy, at least temporarily, seems to have multiplied it.

He ate some food and I gave him some pain-killer this morning, as per the doctor’s instructions. I don’t think Auric needed it, though one can never tell. I would have thought that, if he had given himself any sleep - and it did sound as if he rested at some point in the night - he would be stiff and sore this morning. He didn’t act like it. As I was leaving, I could hear him barging about the library, behind its closed door.

This evening, the newest guest at the Cosy Apartment will meet his fellow residents. We’ll see what he does with his energy then… 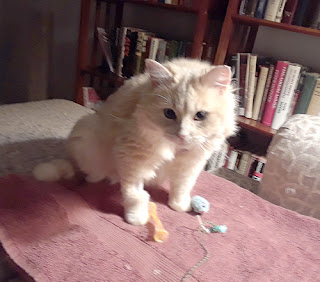