Neville went through a rough few days last week. He vomited five times in four days, which isn’t like him. He started refusing food which may have reflected the upset of his stomach or, as with Cammie, a simple anxiety over relating consumption of food with its return the same way. He was also acting out of sorts.

I tried different food, different incentives, but nothing would induce Nev to eat more than a few nibbles. I brought out my precious reserve of Cerenia (of which I will get more, just in case) and gave him two doses. This eased his insides somewhat, so that he has not thrown up since Thursday. Even so, I was forced to feed him by syringe a couple of times. This, and the Cerenia, given by the same method, he hates more than does Renn and much more than did Tucker, but it had to be done. An appointment with the doctor was to be made today.

But last night, there was, at long last, a change. I had stopped offering him food after snack-time, but, late in the evening, when Renn and Nev were both on the bed, Neville watched Renn eat some of his new food. I knew the Nevsky wanted to try eating. I put in front of him some of the kernels that I give as treats, and he ate about a dozen, which is more than he has eaten at one time since Thursday. The amount of food eaten was less important than that he wanted to eat.

This morning, he ate some more hard-food. But more significantly, he ate some Recovery, his usual soft-food. It wasn’t more than a level tablespoon-full, I’d say. But he wanted it.

I will postpone the doctor’s appointment for now. The tests that could be conducted might not show what is troubling Neville. Renn’s suspected i.b.s. wasn’t indicated on his recent tests, and if Neville has that, I know what to do in any case. I am going to try to get Neville to switch to the gastro-intestinal food, and see if that helps him. If I see that Nev has thrown up again when I return home, then he will have to go to the doctor. However, if he has gotten over his troubles (at least for now), there is no point in subjecting him to a visit.

Wish us a puke-free day. 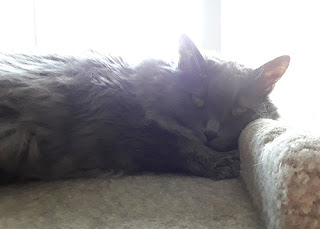