My big boy, Renn, revived a Cosy Apartment tradition: somecat getting sick on a long weekend.

Actually, as somebody reminded me, this seems a repeat of what happened just two months ago. Renn started throwing up last week, unable to keep any food down. As well, he didn’t want to eat, naturally enough; either his stomach was too upset to entertain the idea, or he didn’t want to risk vomiting whatever he consumed; perhaps both. In any case, he was dangerously close to having no food in his system for more than two days.

This followed on a longer period of soft stools and outright liquidy feces. Because he was, until the weekend, otherwise feeling fine, I ascribed the problem to a new food that I was trying out. It is a hard-food that Renn in particular liked. I removed that from the menu, to his regret, but the problem continued (which, of course, could simply have been a delayed reaction to the new food.) Then came the puking.

Fortunately, I had a couple of Cerenia tablets left over from one of Tucker’s prescriptions. (I never throw out medicine I receive from the veterinary until it passes its expiry date. One never knows when it will come in useful when access to a doctor is denied – by a long weekend, for instance.) After allowing the Cerenia to take effect on Thursday, I syringe-fed my big boy with small amounts of Recovery-and-water; no more than ten milliliters every few hours. Another dose of Cerenia followed Friday, with more of the syringe-fed Recovery.

Saturday morning, he was showing interest in food, even nibbling some. I gave him further feedings by syringe, as he wasn’t eating enough on his own, but by dinner-time (three o’clock for the cats), he seemed to have regained his appetite – or his confidence – and ate well, just as if he had woken from a long nap and was hungry because of it. There is always that period subsequent to an illness when one wants to feed as much as the cat wants – to take advantage of the opportunity – yet doesn’t want to feed too much for fear of causing a reaction which spoils the new hunger. My anxiety was accentuated by my decision not to give him any more Cerenia as the previous dose wore off. I didn’t want to add anything unnecessary if things were improving.

But Renn hasn’t thrown up since late Thursday, and is now eating as usual. He has not taken a crap for days, but, since he has eaten little, that is not to be wondered at. I want to see how solid his solids are. Regardless of the outcome, so to speak, I will make an appointment for him at the veterinary hospital; two such episodes in as many months is worrying. Hopefully, it is simply a recurring bug that can be easily dealt with. What I suspect will be found is nothing, and that everything will prove normal. Even so, I want to have my big boy examined. As the last of the First Four, he has a responsibility to carry on.

I made an interesting observation during Renn’s illness. While feeling poorly, he deliberately went into the library and, though Neville was already on the ottoman, climbed past him to the couch and lie down on the heated towel. He always knows it is there, and evidently felt the need for the comfort of extra warmth. Since late Friday, however, though he’s napped on the couch – yesterday was movie-night – he has eschewed the heated towel. This is another sign, I think, of improvement. As well, readers may note the two illustrations. The first, of Renn and Nev in the library, shows my big boy lying but not really relaxing. The second picture was taken yesterday afternoon.

I am grateful for the obvious betterment – but if he thinks that means he won’t soon go to the doctor, he’s mistaken! 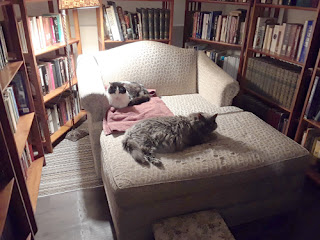 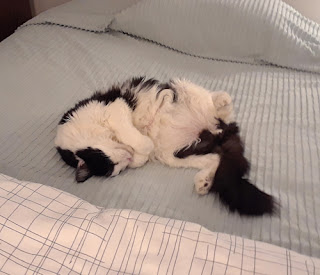