A Change for Neville

Neville’s status in the rescue-group has undergone a change. He is no longer available for adoption, and has been included among the ‘sanctuary-cats’. These are cats who are, and will be, cared for by the group until the end of their days, and who will not be available for adoption, due to physical or emotional issues that render adoptions difficult.

It took some thinking on my part to ask for this change on the Nevsky’s behalf, but I feel that it is right. In truth, Nev has not elicited much interest from potential adopters in the two and a half years since he came to live with me. I think just two people have inquired after him, and neither was suitable for him. Diabetic cats receive little attention from people looking to adopt. Unlike cats who are missing a leg or an eye, those with diabetes involve on-going costs and may become worse, leading to more serious problems.

But the second inquiry, quite recently, made me think that it is best to protect Neville by making him a sanctuary-cat. Neville might have found the perfect home, but it would have been a miracle, really. Aside from his diabetes, his reaction to his treatments have become worse. He growls and hisses when I have to lift him or carry him anywhere (which is why I have changed tactics and now take his blood where he is, rather than moving him to a table); I am not afraid that he will bite or scratch, though people new to him might fear so.

As well, he is an unsocial feline. He would, to be honest, prefer to live without other cats and with only minimal involvement with a human. Very rarely, he will express some affection for me; a little more often, he will want a chin-rub. But he prefers to be left alone. He spends his days sleeping or looking out the window. He doesn’t play, despite efforts on my part to interest him. He enjoys his meals; they, and naps, seem to be all he likes in life.

I feel bad for Neville. I don’t think he’s ever been happy in the Cosy Apartment. But I believe that unless he were to find himself the only cat in a house whose human fed him and otherwise left him alone (and no one is going to adopt a cat with those results in mind), his current location is probably the best he will find. Certainly, the changing assortment of foster-cats has been an ordeal for him, but I don’t feel I can limit my fostering for him. I keep the new residents away from  Nev as much as possible until the time I think he can tolerate them. The only cat who seems not to bother him at all is Renn.

And so, Neville will live out his life with me. He is about thirteen (his exact age is unknown); therefore, he may have six or seven years ahead of him yet. He’s over-weight and diabetic, so that estimate may be optimistic. However much time he has, though, will be spent in a sympathetic environment, with food, soft beds, sunshine through the windows - and as little bother from other cats as possible. 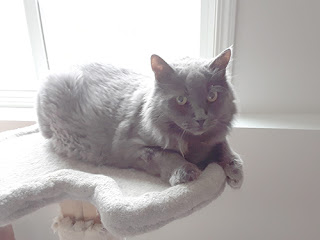