The World at the Edge of the Bedspread

For something different, I thought I would write an entry about me, or, rather, one of my dreams. Though the subject is not typical (they are usually quite varied) the fact that it followed a reasonably lucid story-line is.

I dreamed that I was downtown in my city, at some sort of festival. The late actor Steve McQueen was there, playing a musical instrument made from a brown bottle with an extremely long neck, to which strings were tied; he was playing it like a bass in a band. Instead of a bow, he was using a saw. The festival ended and Mr McQueen departed (not for the first time, of course), leaving his instrument behind. I undertook to return it to him.

My journey carried me to an older part of my town which I don’t think exists anymore (similar to other dreams when I go food-shopping; I always go to the same grocery-store that no longer exists.) In that neighbourhood, I visited a dog-rescue shelter, where I promised to take in a dog named Cecilia, who wasn’t at the shelter just then. Afterward, I continued my search for Mr McQueen, saying to myself, “I can’t have a dog in my apartment; they’re not allowed. What was I thinking?”

I was still pondering this question when I woke. I explained the dream to Hector. He remained silent about the whole thing. 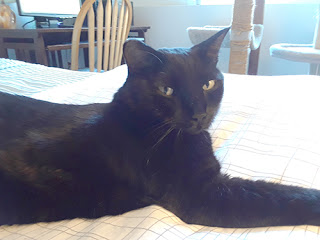 (Steve McQueen’s appearance is due, I believe, to seeing recently a picture of him from the film The Great Escape, in the scene in which he and two other Americans re-enact the Spirit of ’76 picture. Why he didn’t have a fife or drum in my dream, I don’t know. And how fostering slipped into my dream is anyone’s guess…)