Neville is a good example of the erratic nature of diabetes. I detailed another of his ‘curves’ – and explained their meaning - in August, but have not described his diabetic history. When he first came to live with me – in fact, the reason he came to live with me – his blood-glucose numbers were in the mid-teens; certainly not a high range. He almost immediately seemed to go into remission, his numbers being in the single digits for more than half a year.

Then his diabetes returned, though, for another period of six months, it responded very well to small amounts of insulin, a typical ‘curve’ beginning in the mid-teens and dropping to about five or six: a very good response.

Then, it changed again, and he rarely began a cycle lower than the high teens or low twenties. Insulin would drop his numbers to nothing lower than ten or eleven. This has remained the pattern, despite gradually increasing doses of insulin, and it was repeated with yesterday’s curve.

I am not worried about Neville. As with Tucker, back when diabetes was the worst he had to fight, a relatively high nadir is not indicative of a poor condition. Neville is not drinking great amounts of water – less than he used to, now that I think of it - nor is he urinating often. He can jump well, insisting, rather annoyingly, on not using Tucker’s Tuffet to leap onto the library couch (even though Horace has used it right from his arrival), which demonstrates no rear-end weakness. In other words, his continued imperfect ‘curves’ are the sole source of dissatisfaction with his diabetic treatment. And as in Renn’s case, there is little point to another veterinary visit when nothing more can be added to his treatment but an adjustment in his insulin dosage - which I feel I can determine on my own – and a change in diet, which has been attempted previously with indifferent results.

So, while the Nevsky frustratingly refuses to show a laudable ‘curve’, the ‘curve’ itself does not show the complete picture. And I think, for the moment at least, that picture is the image of decent health and moderate contentment. 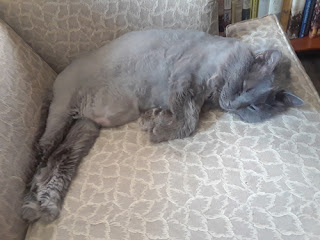