After a very busy week – it’s astonishing how much a job interferes with what’s important in life – I have at last been able to write another entry on the blog. Unsurprisingly, it describes Zofia’s continued integration in the Cosy Apartment, a process which is going well.

Her biggest challenge is Neville, who did not like her advent and has only grudgingly, and slowly, come to understand that he might have to accept her presence. The Nevsky no longer growls at the sight of the baby, and even acquiesces to her lying on the bed – at some distance to himself. For her part, little Miss Zed will avoid the big grey uncle; when she climbs up onto the bed – she’s discovered the softness of the folded comforter at its foot – she makes a wide circle to go around Nev. 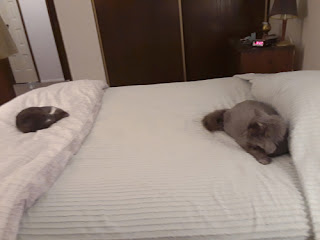 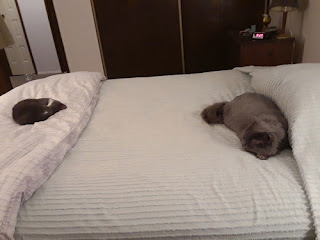 Her relationship with Horace is better but still progressing. As may be seen, it has its very pleasant moments, when Ivory finds his little sister near him and draws her close for some cleaning. Zofia enjoys the attention; when Horace finishes washing her head and moves to her body, she sticks her head back under his tongue. She clearly prefers the feel of her fuzzy pate being groomed. 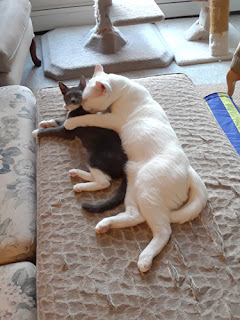 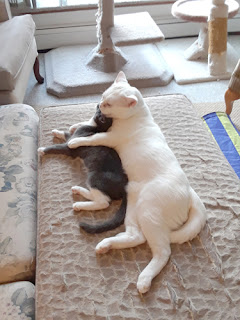 When all is placid, Zofia will be, too. But when they meet on the floor, the baby is just as likely to want to scrap with Horace as cuddle with him. It’s not play; I think his size is a bit intimidating to her. It needn’t be: when faced with such infantile opposition, Ivory backs away. He’s not a fighter. 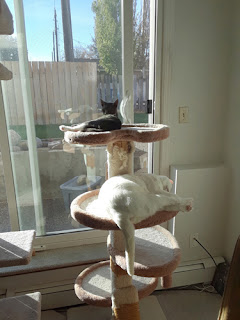 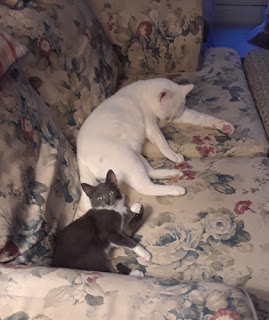 Meanwhile, Hector and Zofia’s play now includes wrestling, as well as chasing. I worry about the former, since Hec is so much larger than Miss Zed, and I know that she feels overwhelmed at times. She will growl and hiss when he presses his advantage too heavily. I keep an eye on them and, when I must, break them apart. But Zofia doesn’t let Hector’s ignorance of his own strength end their good times. She is frequently urging the Turk to play. 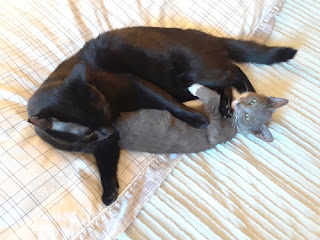 The rescue-group is now promoting Zofia for adoption. Ordinarily, I would predict her rapid removal from the Cosy Apartment as a result. But adoptions have slowed greatly in the last couple of months, probably due to the sudden and rather frightening increase in the cost of living. I don’t believe ours is the only rescue-group in North America so affected. We have a number of kittens quickly passing their most adorable stages because of a lack of interest (to be precise, a lack of funds with which to take on a new family member). Zofia may be one of them. She is, of course, welcome to stay in the Cosy Apartment for as long as she likes. 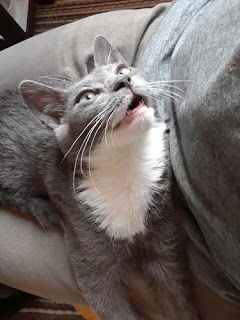 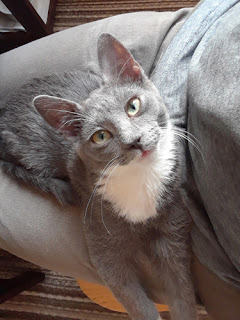