Sable and the Hard School of Economics

No doubt each person reading this has experienced the great and sudden increase in prices that has swept over much of the world recently. I have seen the retail cost of items increase by ten to fifteen per cent, and in some cases forty to fifty per cent. Whatever the cause of this inflation, and whether it is necessary, is all rather immaterial to those of us who have no influence on it, for good or ill. The fact is that we must pay the new prices or go without.

The cost of cat-food has risen along with everything else. As long as I am able to prevent it, my own beasts will not suffer a reduction in their rations - though I may have to forego opening up the house in Montreux this year... There will have to be other adjustments, however.

I don’t have many outsider-cats coming to visit the food and water at Café Cosy. In fact, I have only one frequent visitor, the all-black cat with the frost-bitten ear, Sable. 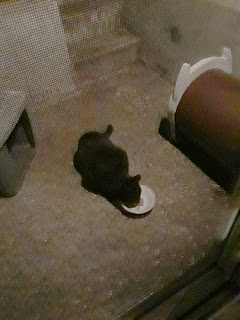 Sable is feral. After years of patronising the outside bowls, she is still very wary of me. But she enjoys the fare offered, and knows that she has a source of sustenance in addition to, or, if all else fails, in place of, others. However, I have found that I have had to curtail her portions.

In the past, I have fed Sable as much soft-food as she wanted. That frequently meant two tins of Fancy Feast, sometimes more. I was reluctant to cut back on her amount, for fear that she might not have anywhere else to eat. But now I feel that I must limit her to one tin of Fancy Feast per visit

I know she wants more. She waits for more. I feel terrible at having to turn off the outside light, to signal that the kitchen is closed. The café of course remains open, twenty-four hours a day: fresh water may be had at any time and the hard-food bowl is always stocked. Sable, and anyone else who stops by, will not go hungry. But the soft-food will have to be restricted, which may be felt especially in the coming cold.

Such is the cost of inflation and rising prices: those who need most, also suffer most. It’s unfair, and I hope Sable will find her reduced rations enough, until the better days when I can once again feed her as much as she desires.