Hector and Zofia are playing.

Hector has, I think, wanted to play with her since he realised that Miss Zed was some kind of cat. He’s been trotting after her wherever she goes when she is out of the library. It’s never a chase; he lopes, rather than runs. And when Zofia turns and lets him know he’s stepped beyond the bounds - her bounds - he backs away.

Last night, I watched her chase Hector from the kitchen into the sitting room, where Hec rolled on his back; Zofia darted into the nylon tunnel. She has also leaps out of the tunnel at the little Turk, who jumps back. They trade whaps now and then, but there is no force behind them.

As is the way with cats, they may not show me playfulness again for a while, or it may come again tonight. Hector wants to play with Zofia more than Zofia wants to play with Hector. But I suspect that will change; after all, she’s a kitten.

Horace meanwhile has managed to sniff noses with the baby, which has been his ambition since she arrived. He watches her and follows her to an extent, but not as much as does Hec. If this keeps up, there may be wrasslin’ and chasin’ around the clock; I wouldn’t even mind losing sleep to hear it at night. 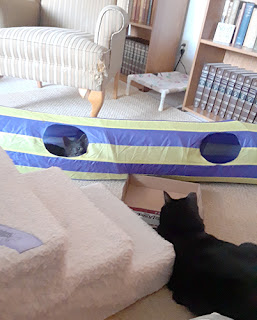