The library used to be Minuet’s safe-room. She ventured from it, and probably didn’t feel endangered outside its walls. She knew she could handle the other cats, as old as she was. But, as old as she was, she simply preferred ‘her’ room. It had everything she needed.

The other cats stayed out of the library initially, even after the door was kept open and those inside were free to come out, and vice versa. Then Neville, who has an affection for the library, and Hector started returning there. Madame didn’t like their presence but, when she saw they left her alone, she tolerated it. Renn visited only to use the litter-box there.

Minuet died in August, and Neville and Hector, especially the former, used the library more; cats can be practical and unsentimental much of the time. Then Renn began going into the library again. He used the cat-tree and, interestingly, he frequented a cosy and isolated spot behind a bookcase in the corner. I initially thought it was because of illness, but it’s not. He just fancies it periodically.

Last night was movie night. For the first time in months, going on a year, my big boy joined me in the library. He didn’t watch the film with me; he never does. He slumbered through the whole thing. But he lie next to me, on the heated towel. It was very pleasant to view a Saturday-night movie with my friend again. 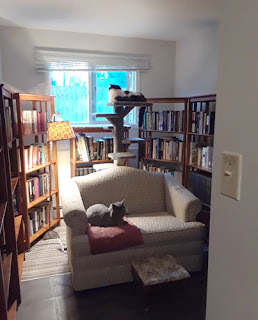