Undine asked about Zofia's origins. They are simple, sadly: Miss Zed was found wandering the streets, and someone who felt she needed help asked a rescue-group member to accept her. That member took Zofia in - searched for a possible owner who might have lost her - and saw to her initial needs, but really had too many rescues already. As no one was looking for her, or responded to inquiries, Zofia became a rescued cat, and came to me.

Her reaction to the food she was given was good – she ate one largish portion but no more – though I want it to be better. I bought some high-end soft-kitten food for her, and she consumed a good amount of that. The requirement is, of course, that she continue to do so. 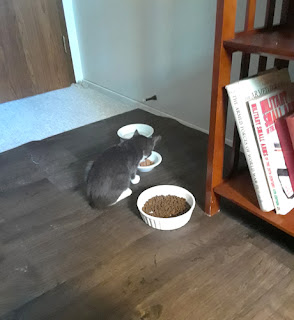 I am not above syringe-feeding her some more. It’s easy, relative to some cats I’ve had to feed, but of course she doesn’t care for it. I have Recovery at the ready, and will supplement that with syringes of Kitten Milk Replacement. This is not actually necessary, I think, since it is meant to be a substitute for a mother-cat’s milk, and if the kitten is weaned then it has no point. However, it contains nutrients which are, even so, beneficial, and if I don’t feel that Miss Zed is eating sufficiently, then she will receive those benefits. She is also crunching some hard-food; though not kitten food, its kernels are flatter than many, and thus easier for her to break up. 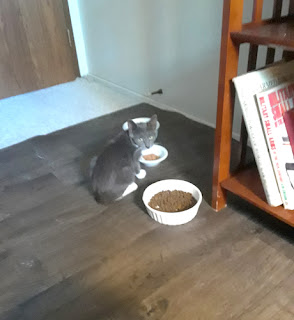 Behaviourally, she is a typical kitten. I spent a couple of hours with her this morning and she wouldn’t sit still. She wanted to try my tea, and my peanut butter cookies; she wanted on my shoulders, up the cat-tree, across the bookcases – then down onto my shoulders again. She played with my trouser cuffs, and climbed my calves (note to self: cut Zofia’s claws). She is intrusive: at one point she stuck her nose in my nostril; I think she was probably aiming for my eye. 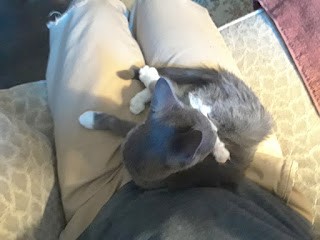 I brought in some toys for her, and she knocked them about for a half-hour. I have to get some more, because the young mancats in the household, especially Horace, love playing with them, and they have largely disappeared. 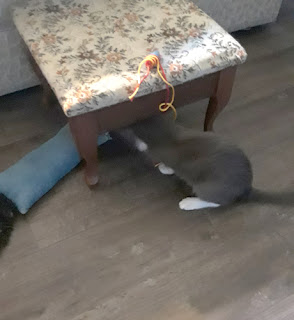 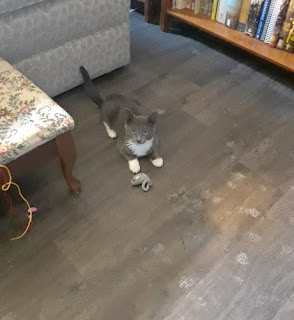 So far, Zofia is doing well, I would judge, but not as well as I want. She needs to eat much more, both for nutrition and for bulk; one can see how slender her body is in the last photograph. She is also not drinking enough water. But these are very early days yet. Her waste management is satisfactory, her activity level normal and her food-consumption on its way up. 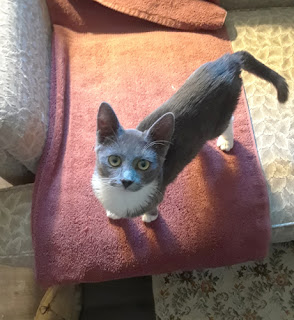