I took Neville to the veterinary hospital yesterday. He had been acting oddly: growling at everyone, including me sometimes, not eating and generally behaving unusually. I thought it had something to do with Zofia, as it began the day she was released from the library. Nev growled at her on sight, then transferred his annoyance to other cats. It didn’t help that I poked his ears on the weekend to test his readings; it’s a process he loathes. Then he stopped eating hard-food, even his favourite ‘dietetic’ snacks, and yesterday, he ceased eating soft. 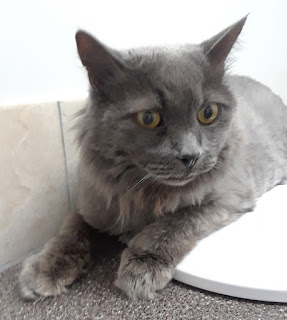 Because the Nevsky receives an on-going prescription for insulin, the rules dictate that he must see the doctor every once in a while, and he hadn’t, so the timing was right, anyway. He was examined, and the only physical problem that he had was the need for a dental. Though his mouth was a bit angry, the doctor did not feel that it would have prevented him from eating. And though a sore mouth might have contributed to his grumpy moods, I don’t believe it was a major cause. A dental procedure will be arranged very soon; in the meantime, blood tests were performed; in addition to telling us immediately if anything was amiss, they would be necessary for his surgery.

Neville is otherwise well, physically. After conversing with another blogger who rescues cats, I feel that I rushed Zofia’s integration. The baby is doing very well with the other three. Hector and she play, Horace is able to sniff her now and then (which seems to satisfy his desire for interaction) and even Renn has accepted her rather placidly. This made me feel that the kitten’s introduction could be expedited. I think I was wrong. 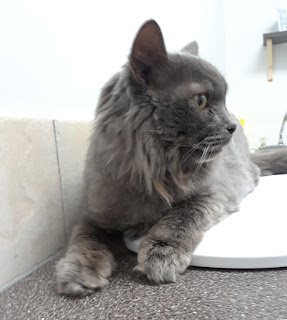 So Nev and she will be kept separate for a while longer. I think Miss Zed’s time with the younger cats is successful; Renn can take her or leave her. So, while I won’t restrict her free time, I will close the door on Nev in the bedroom when she is out and about. He spends a good amount of time there anyway, and my big boy was the one cat with whom he had no issue, so Renn, who usually hangs out in the bedroom, anyway, will stay with him. My coming and going, and working on the computer there, will assure Nev that he is not being punished. And I will, of course, give as much time as possible to the others, including the baby.

I hope that not having to see Zofia will return some equilibrium to Neville’s life. He was given some Mirtazapine for his appetite; he ate last night and this morning, enjoying some of his ‘dietetic’ treats. As I lie for twenty minutes on the bed, he lie on my chest, which he has not done before, and purred. Glad to be home from the hospital, he seems to have forgiven me much, as cats will. I hope he will forgive me my error in judgment, and eventually accept Zofia.