Spy vs Spy and the Common Enemy

When Auric was living with me, I wrote, in a jocular vein, that he and Hector reminded me of Mad Magazine’s Spy vs Spy cartoon characters, because of their colours. Now, the comparison is much more apt, with white Horace taking the place of the golden Auric. 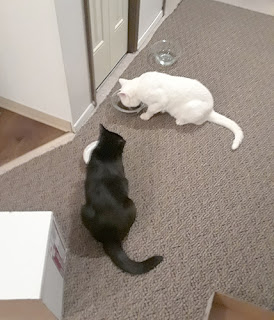 Furthermore, Hector likes chasing Horace. It’s not playful, nor is it fighting. He is trying to establish dominance, I think, though there doesn’t seem to be an evolution of the situation. It may be due to the fact that Horace isn’t a fighter, and doesn’t retaliate. Nor does he appear to acknowledge Hector’s superior place in the hierarchy; Little Ivory is too placid for that. We therefore seem to have reached an impasse.

Horace does follow Hector, but there is much more curiosity in his actions than hostility; there is, in fact none of the latter. On the other hand, the newcomer’s presence is often enough to make Hector want to smack him; he does not, however, chase or whap him continually. Neither cat is aggressive; if Horace started playing with the other, their pairing might turn into an agreeable association.

But sometimes they come to a concurrence. Now and then, they find common ground, and, indeed, a common enemy, though, again, the violence of what might be is dissipated by distance and personality. While watching birds, Hector stares silently; Horace gives voice to a continual series of squeaks and pips. It’s nice to see them acting together. 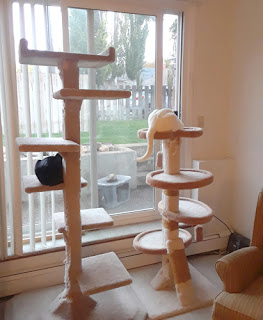 Little do they know I am paying the birds by scattering food for them in front of the window. For the cats, the birds, and me, the common enemy is a situation with no disadvantages.