Firstly, I want to tell readers that Renn is doing well. Yesterday he refrained from vomiting, and ate a good amount; today is the same. He is under-weight, for Renn, and needs to consume more, yet he is avoiding hard-food, which would, I think, bulk him up more than the soft. The latter he is eating, but not enough to add to his weight. He goes the doctor on Wednesday. 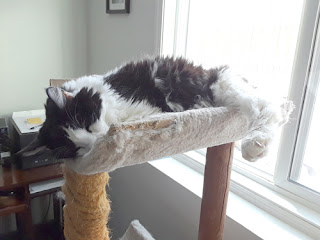 Secondly, I would like to introduce the Cosy Apartment’s new guest. I’ve named him Auric. He was brought to me yesterday, and will be a new adoptable cat in the Lethbridge PAW Society. 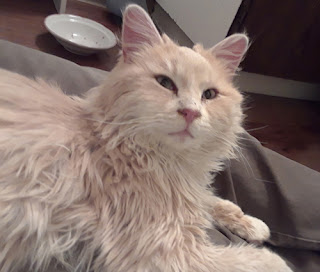 He was found Friday night by a couple out walking their dog; Auric came right up to them. They at first assumed that he belonged to a neighbor, and so aside from greeting him, left him alone. When he followed them, they noticed how ragged and matted he was, and skinny. They brought him home, despite being, as they stated, ‘not cat-people’.

Not cat-people or not, they improvised rather imaginatively, giving Auric straw instead of litter of which, naturally, they had none, and some of their own roast beef dinner for food. Auric demonstrated that he was very friendly, and used the straw as it was intended. One of the couple’s daughters fashioned a harness from a dog-leash, took Auric outside – where he obligingly pooped – and brought him back. 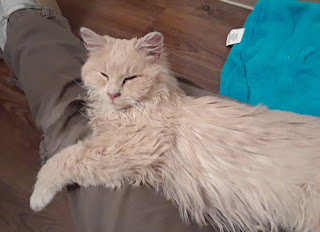 Despite the success of their impromptu arrangements, the family needed to find a different refuge for the cat, and called the rescue-group of which I am part. As readers know, the Cosy Apartment’s population is low right now, and, since Hector need not be restricted to the library, I felt I could accommodate Auric.

His condition is poor but certainly not irretrievable. He is under-fed, a problem easily solved, and his coat is rough and matted. Now that one day’s efforts at grooming won’t be undone by the next day’s hard living, he will be able to clean himself adequately, which he has already begun, and I am removing the knots, giving him an uneven appearance but probably providing more comfort than he has had lately. 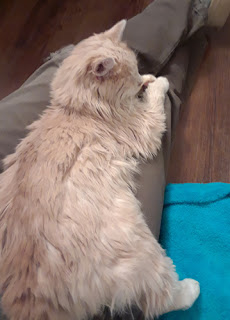 Auric’s worst trouble is a bad upper respiratory infection. His nose is crusty, and he breathes like an ancient steam ship’s dying engine. We will make a veterinary appointment for him early tomorrow. For now, he is isolated from the other beasts, and I change my clothes to spend time with him. He may also need a dental.

He has Hector’s old habit of knocking about his water-bowl. I have changed that to a lower bowl with a broader base; fortunately, he seems to lack Hec’s tenacity for spilling fluids. He also throws his hard-food out of the bowl before eating it. These two traits made for a stew-like mess for me to find this morning. But he and I are working on these puzzles. 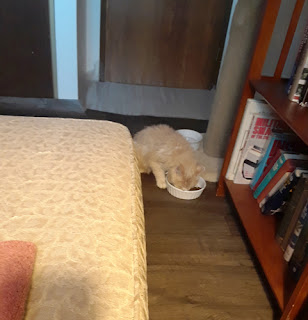 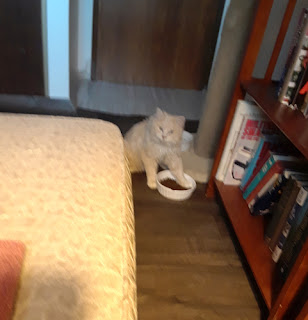 This newest fellow knew to use the litter-box – for both forms of waste – and the only protests he makes are when I have to put him in a carrier, out of the way while I clean his room. He was silent last night. He has proven himself extremely friendly; likes his lap-time; purrs and kneads appreciatively and evidently likes heights, so he will enjoy the cat-trees when he is at last released from the library. 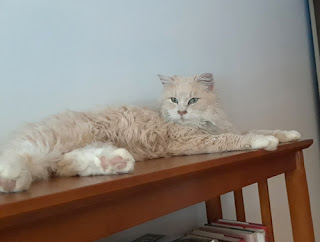 I think he is young, perhaps two years of age or less, though I am not good at estimating the age of any animal, and I can only guess that he is male. His colouring, a very pale orange (similar to my late friend Raleigh’s, as Katie Isabella’s mom pointed out), suggests a male; if he is, then he is likely already neutered: his face is small and thin, his urine does not have the distinctive tomcat-smell, and I have felt nothing where a tomcat has something.

Mysteries regarding age and gender, problems about his breathing and teeth, will be solved. One can see a handsome cat in the bedraggled refugee, and his chumminess was immediate. These factors will assist greatly in his adoptability. Once his health is robust again, he will no doubt swiftly find a loving home. Until then, he is a welcome guest at the Cosy Apartment. 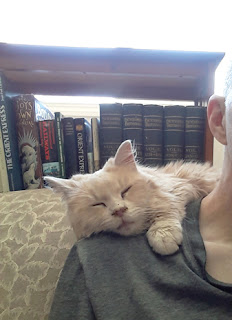