Auric was released from the library last night. The results were less than I had hoped but more than I had expected.

Auric was very excited. He explored everything, even the spaces between bookcases and behind couches. He sniffed and sniffed and looked and looked. I think he enjoyed the view from the wide glass doors in the sitting room, and I know he liked being able to climb the tall cat-trees. It took him a few minutes to figure out that he could use the various levels of the platforms to climb up and down, but he mastered that swiftly enough. 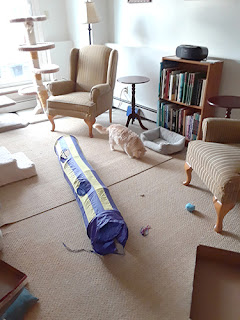 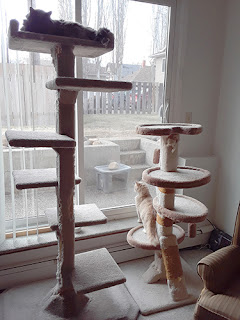 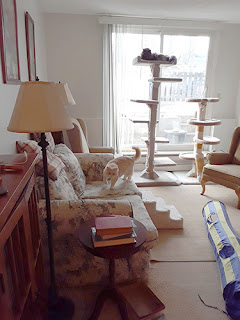 He played with the track-ball, and seemed to get a kick out of it. He wrestled with some of Hector’s fabric mice and found the idea of boxes quite intriguing. 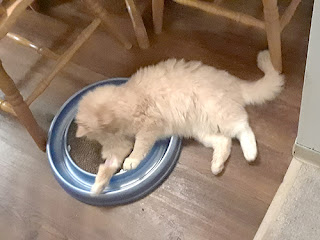 His interaction with the other cats was varied. The least bothered was Neville. A fierce growl, reinforced with a whap at close quarters, persuaded the Golden Boy not to press his acquaintance with the Nevsky too closely. I let Auric out thrice in the evening, for about half an hour each time; he first met Nev on a cat-tree, and then on the floor. The latter was not putting up with any kittenish forwardness on either occasion, and Auric respected that. 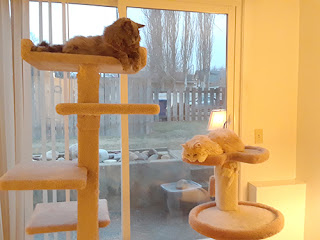 Renn found the newcomer irksome. Auric jumped up on the bed where my big boy was napping; Auric did not feel that Renn’s warnings had the same force as Neville’s, though the new boy didn’t spend much time bothering Renn. If such a situation occurs again - and it will - I suspect Renn will administer a few whaps before retreating. I don’t want Renn to fear Auric’s presence, as he seems to do Hector’s, so I will have to watch the relationship there. A few medium-strength blows by a big paw to some light orange fur won’t go amiss.

The dynamics between Auric and Hector have promise. Our dark knight didn’t care for Auric’s release, and he retreated before Auric’s advance, accompanying the action with hisses and growls. But there is more to it than that. As I wrote, I let Auric out of the library three times. Twice, Hector hid, or withdrew to a distant location, but kept his eye on the escapee. The third time, I saw that Hec was in the sitting room, at the top of the tallest cat-tree. I thought it would be a good time to bring out Auric. Though he could only hear Auric - the latter makes an almost continual chirping sound when excited - and was across the apartment from him, Hector climbed down from the tree, crossed the sitting room and corridor and sat on the bedroom’s threshold to look at Auric. I doubt that any cat would do so if he wanted nothing to do with the new situation. 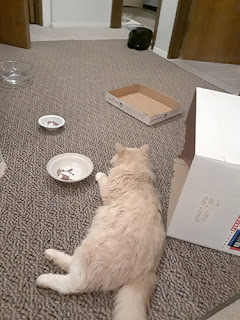 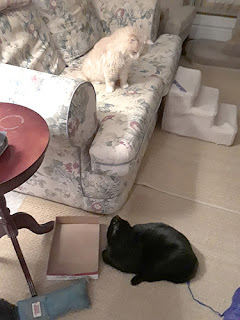 The two were often close to each other and, though I stayed between them - Auric exhibited too much of a desire to rush at Hector, for whatever purpose - I ensured that Hector observed his new roommate at length, watching him play, and roll over for chest-rubs. I don’t expect Auric to ignore the others, but if he treats Hector with little interest, at least at first, it will go a long way to smoothing their living arrangements.

However, I was pleased with the evening’s results. Tonight, there will be more free time for the Golden Boy. We will see what use he makes of it.