Both Renn and Neville are doing well. The latter is once again talking as his food is brought to him and sometimes mumbling as he eats; these are good signs. He is putting away a satisfactory amount, though not as much as he had been. That is probably good, too, considering his size and weight. Renn has shown no signs of rejecting his food after it is consumed, and I am preparing to try a new medicine on him that has proven effective with other cats of my acquaintance.

My older cats’ most recent troubles started me thinking about the affinity I have for them. It’s rather like other relationships humans have with other people, with animals, objects and less tangible items. When I was young, I would consider my parents and people of their generation as rather out of touch with current modes. As I myself aged, I have come to realise that they weren’t out of touch, they just had more in common with the past, or, more accurately, with what was contemporaneous with them.

Those with whom we grew up, with whom we lived through the same eras, speak the same language, in terms of slang and idiom; we comprehend the same attitudes, even if we disagree with them; we have experienced the same events, and know the same references. The chances are good that the best - or at least the most vibrant - parts of our lives were earlier, and we are entering that long period of slow bodily decline - though not necessarily of dissatisfaction or sadness - that seems to occupy the greater portion of our physical lives. And we of a generation are entering it together.

Just as did those who came before us, we have a fondness for what we knew and liked, the music, the movies, the clothes. We see the actors we grew up watching at the cinema or on television and, because they were usually already established when we came to know them, we are shocked that they are so old now, or have died. We think that there is no one comparable to replace them. The films and music are of different styles, and not what we enjoyed, so we enjoy those of the present - if we enjoy them at all - less.

I have written about my First Four, the Old Guard, of whom Renn is the last survivor. But Neville is included in a similar group, due to his age. These are the cats who have lived a long time, in cat-lives. They play less, if at all, and sleep more. They move more slowly than they did, and they complain about more. They and I have these traits in common, and so we have a bond that I don’t have with younger cats.

I seem to be able to develop affection for most cats who come to stay with me. There is always something unique about each, and each has its own character that creates affection. Hector and Auric have vitality and energy, and it’s fun watching them play and run; I enjoy their closeness when they snuggle with me, and I am grateful for their trust and affection. It is easy to love them.

But they are not of my generation. That is missing. It may be similar to how one feels about one’s children; there may be no limit to one’s love for them, one may enjoy their company and even revel in it. There is pride and protectiveness and a sense of family. But there is rarely that camaraderie, that fellowship that comes from being of the same generation, a fellowship that need not even be accompanied by friendship; two enemies of the same generation will roll their eyes in unison at the antics of the young.

I suspect that, as the young cats in my care age, they too will fall into ‘my generation’, their shorter lives causing their ages eventually to ‘catch up’ to mine. They will become slower and complain more, and we will have that affinity that I once had with their elders. And together, we will look askance at the silliness of youth. These are the dynamics of generations, how they come and go, and how they understand each other, no matter the species. 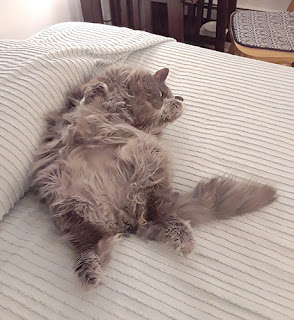 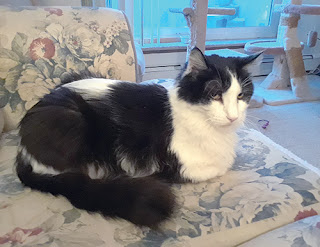