Minuet on Day One

Minuet’s first night in the Cosy Apartment went very well. She arrived at about 3.30 Friday afternoon, and went into the bathroom. She arrived with various items, the most important of which was her insulin, a different kind than Neville uses. It is delivered by syringe, rather than pen; I am currently moving her injection schedule a little time each day to correspond with the Nevsky’s.

She also came with a rather terrible ‘house’ (a covered cat-bed) that was, I was told, of great comfort to her; it was, however, where she had wet numerous times in the past. Though it had been repeatedly washed, it was in bad shape, and was not only unhealthy but encouraged Minuet to continue wetting there. When she came out for her first meal – she has had no reluctance in eating – I removed the house and threw it out. This led Min to find a substitute. Though I had hoped she would use the soft, folded blanket I’d placed for the purpose, she chose instead to lie in the litter-box.

Lacking a ‘house’ to give her, I made one from the bottom of an old, cleaned litter-box, with the thick blanket in the bottom. Some coaxing with a catnip toy brought her into the box, which she continued to use through the night. 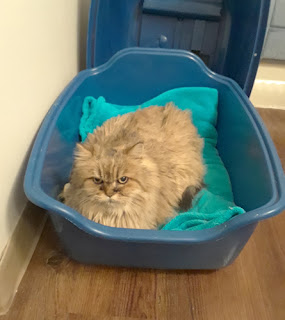 Minuet has so far exhibited no hesitation in using the litter-box. Though her former owner had resorted to Cat-Attract cat-litter, she had merely sprinkled it on Min’s normal litter. I put only Cat-Attract in the litter-box. Minuet has used it repeatedly (as with many oldsters, of varying species, she seems needful of wetting in small amounts many times) for both liquid and solid waste. Though it is a relatively expensive clay litter, I will use it from now on, if that is what works. 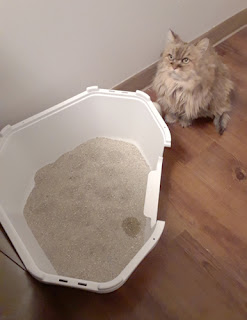 Right now, Min is in the library. I thought it safe to move her there after seeing her correct application of the litter-box. She has not taken advantage of the relatively generous space of the library, after the bathroom’s confines, but the expansiveness of the room may be its own disadvantage at this stage of her acquaintance. I am, in fact, pleased with the progress of her situation: she has not only not wet outside the litter-box (so far as I can tell) but is amenable to new human friendships, purring loudly in response to petting, stroking and brushing.

Considering how her world has changed, those responses are quite remarkable, and remarkably good.