Two weeks ago, Hector received his new box, which he turned into a cave. But it has become more than that for our dark knight. It has become his sanctuary.

Hector will hide in the box - ‘hide’, in this case, is a relative term - and grab at my ankles as I walk past him, a little black paw shooting out from around a cardboard corner. When we play with the string-toy, he will seize the end in his mouth and carry it proudly back to the cave, his home-base. (What he thinks to do with it there is never explained; I don’t think that he knows.) And when he is in trouble, after spilling water or chasing Neville or Renn, and I speak sternly to him for it, he hurries to the cave.

Since Hector doesn’t have a ‘safe zone’ - with the closing of the library for the duration of Auric’s isolation - the cave serves as Hec’s sanctuary. I respect that, and do not pull him from its confines, or go after him there, if we are playing. If he runs to the cave after having done something bad, I will let him know I see him there, but will do nothing else; he will know he’s misbehaved, and that’s enough.

I think it’s important for Hector to have an inviolable spot. The others don’t seem to need one; they’ve been here long enough to know that they can ride out a storm without such a location. Hector, doing something he shouldn’t more often than the oldsters, benefits from his sanctuary. I believe it gives him confidence and a sense of belonging. 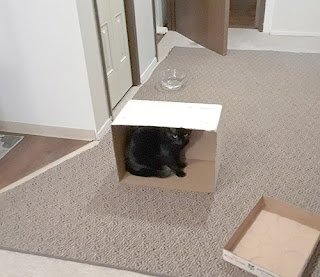