Comfy Nights for Me, Too

After writing yesterday about the heated pads in the cat-beds, I was reminded of my own heated mattress pad in my own bed. I bought a new pad recently, my previous one having ceased to work.

My old heated mattress pad had given me good service. It was very useful on nights when I needed extra warmth but felt that the comforter would have been too much or - as happened more often - I wanted to pull the comforter up in the middle of the night but there were cats weighing it down. And sometimes, of course, the night became so cold that even with the comforter, I wanted more warmth.

When that one failed, I decided to buy another. It is a costly purchase but worth it. Naturally, I could not find the brand that I priorly bought. That one had five settings and, until it died, I rarely needed to have it higher than the second setting. The new mattress pad has, instead of a button to press to increase the heat, a dial, numbered up to ten; testing it, I found that a setting between one and two is adequate for my needs.

It makes me wonder, though, what nova-like temperature would be generated by turning the settings to their maximum, if even setting number two is too hot. I hope I don’t accidentally switch it to a high setting some evening when I am too groggy to be exact; I may roast myself alive. The advantage to this is, however, that when I die, I can forego the expense of a funeral. I need merely be laid on the bed, and the heated mattress pad turned to number ten. All that will be needed afterward is a broom and a dustpan… 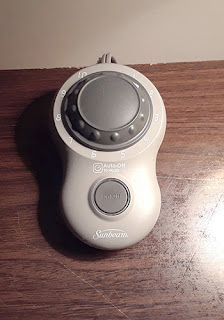