Jessel went to the doctor today, possibly for the first time in his life. It won’t be the last time but, if his health remains as it is, he should not have to see the inside of a veterinary hospital often.

The doctor proclaimed my new foster-cat in good health. His heart and lungs sound very good; his mouth and teeth may be described likewise (perhaps surprisingly), though these will receive more attention when he is under anaesthetic for neutering next week; he has ear-mites but, like any possibility of worms, this is already under treatment. He received vaccinations and, of importance not just to his longevity but to his adoptability, he tested negative for FIV. 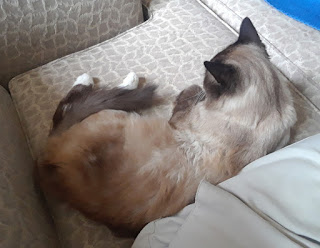 He behaved very well in the examination room, though he cried somewhat during the journey there. Certainly, I’ve had cats who were more fractious with whom to contend during such visits. I could hear him in giving a few choice exclamations in the back when they took him to sample his blood, though this was hardly extraordinary.

The veterinary confirmed my and a rescue-group colleague’s estimation of Jessel’s age to be about two years. 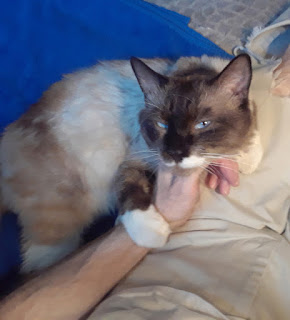 Young Blue Eyes was almost easy to put into the cat-carrier (he was pushed in bum-first) and when he returned, he spent about ten minutes purring and butting me with his head. Not understanding doctor’s appointments, he may have thought that he was on his way to a new place permanently. Though he has been in the Cosy Apartment for only a week, he seems to find it a pleasant abode. About this I am, as you may guess, happy. He also appears to trust me; I am not displeased to think, however, that affectionate treatment from other humans will result in a similar reaction. That is, after all, essential for a successful adoption.

Jessel will go back to the doctor for his surgery next Tuesday. That will be a most anxious time for him but, like today’s conclusion, he will come back here afterward to recover. Then will begin his interesting adventure: integration with my beasts, and a further stage on the road to adoption. I will leave you with his first official photograph; as my friend in the rescue-group who took it rightly wrote, it is not bad, considering he was unhappy at the time – and physically restrained - about to receive an ear-cleaning from a stranger. I think you will agree that the little fellow probably can’t take a bad picture. 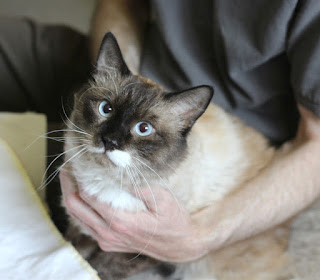