Due to regular meals of a good quality, clean water, a stress-reduced environment and plenty of time to devote to grooming, Jessel’s fur is becoming smooth and soft. He is conscientious in his hygiene. As a result, his hair is seen to be of a striking pattern, filled with colour, from dark puce to blond to a coppery hue. He had arrived with a flattened burr embedded in the fur of his tail, and I wasn’t able to grasp it well or long enough to pull it out; it was strongly fixed. Several days after his arrival, I came into the library early one morning to find what looked like the remnants of a cat-fight: bits of hair all over. But it was the successful conclusion of what was probably a night-long struggle against the burr. Jessel removed it on his own. 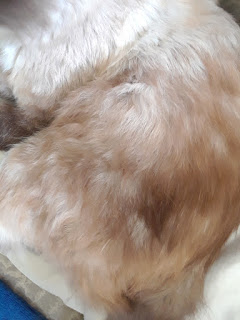 His appetite is becoming normal, I think. After initially eating all he was given, and swiftly, he is leaving small portions when he is sated. This is, I suspect, a sign that he realises his meals will be coming regularly from now on. At the other end, Jessel’s litter-box habits are excellent: he wets a decent amount once or twice a day and poops, on average, twice every three days; it is a big amount and smells strongly enough to rival Renn’s. That’s quite a boast. 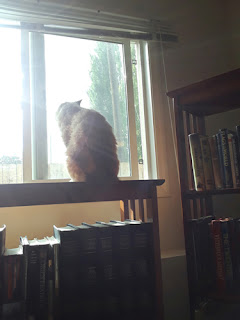 In terms of food, behaviour, litter-box routines and cleanliness, my new foster-cat has shown himself an easy-going fellow who takes things as they come. This all bodes well for his eventual adoption – and suggests that Jessel has some lessons that would be good for anyone to learn. 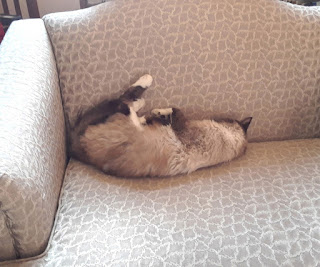