Some have asked how Josie is doing. My Chubs is all right. I think it is a matter of her having bad days and good, and days that are in between. I can tell that sometimes she feels quite well: she eats, even indulges in a little soft-food, takes an interest in what’s going on outside the apartment and plays. At other times, she doesn’t eat much, is slower in movement and pauses in mid-action. I think, now, that this is less confusion than a reaction to the aches and pains due to her age. 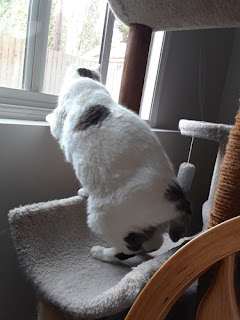 I have stopped giving her the liquid joint-medicine, as it seemed to be troubling her: she would swallow continually for some time after I would give it to her. I had the feeling that it was causing some problems for her, perhaps more than it was solving.

But Josie’s movements up and down the bed and cat-trees are less abrupt since I put in a third set of stairs against the bed. I believe she is dropping less from the bed to the floor when she wants a drink of water. I think she had done this simply to save the time and effort of using some of the stairs that were farther away from where she wanted to go. 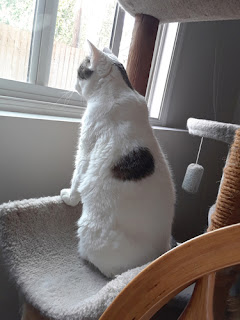 She is also enjoying the warmth generated in the heated cat-bed, now once more installed where Cammie used it. She doesn’t lie in it all the time, but probably will more, once the weather turns colder. I think it helps her, feeling the heat in her body. As well, it is near Cammie’s Bowl, which encourages her to drink.

While I would like my old lady to eat more, and consume more soft-food, her own plans are sufficient for the time being. I will forego a visit to the doctor for now. I find that trying to get cats to do or take things for their health is often a question of whether it will add to their well-being while also subtracting from it. At Josie’s age, I will err on the side of her comfort and ease, rather than her actual health. There is no advantage to facilitating a longer life if such facilitation diminishes enjoyment. Cats don’t know why they are being deprived of this, or being forced to take that. The very provision of some cure may obviate its benefits. 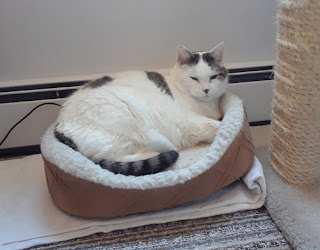 So Josie and I will work together on her future. She will tell me what she wants, and I will try to give it, slipping in what she needs, when I can. Perhaps between the two of us we will make her very senior years contented.