Rumbles from the Interior

When I have time off, two things usually happen: a cat becomes ill and I get a new cat. Renn thought he would keep the former tradition going.

After Josie’s trouble last week, Renn began exhibiting signs of unusual behaviour. He stopped eating and drinking, became lethargic and lie much of the time facing the back of a chair or couch. He also vomited several times and had liquidy stools. My big boy showed some improvement over the weekend, but by Monday, I realised that he was not getting better. I took him to the veterinary hospital that day.

Though the results for his blood and urine tests have yet to be reported, the doctor thinks Renn was experiencing an intestinal infection, a bug disturbing his digestion. Some Cerenia was given to settle his stomach, probiotic to add to his food, and some medicine to counter-act the fluidity of his stools.

So far, Renn appears to be responding well to the medicine. He has eaten – rather a decent amount, actually - and drunk water. His manner is much more like his old self. I gave him one dose of the drug meant to solidify his waste: it did not go down well. Injected in liquid form, it was spat out, thrown off by shakes of the head and burbled out in bubbles. I suspect very little of it saw the inside of Renn’s intestines. Worse, after eating well upon his return from the hospital (due, likely, to hunger and a newly calmed stomach), the horrible medicine put him off his food for the rest of the day. He fortunately tucked into breakfast this morning. I won’t be giving him the rest of that medicine unless absolutely necessary.

Bodily speaking, things have been strange in the Cosy Apartment. Josie had her problem – and now will have nothing to do with any variety of soft-food, existing only on Z/D hard-food. Then Renn had his - and is eating more soft-food than he has in a very long time. And on Sunday, I had terrible stomach cramps which had me lying down most of the morning, even though horizontality did not really bring more relief than verticality. The pains departed as abruptly as they arrived. I could not think of anything that I had eaten that I had not already sampled without harm – though a bad egg may have been next to a good one, and a tainted piece of chicken cooked with a beneficial portion.

In any case, I am recovered, Renn is doing well (paws crossed) and Josie, except for the self-imposition of a limited diet, is back to her old ways. It’s when things start returning to normal that all changes. I will write about that tomorrow… 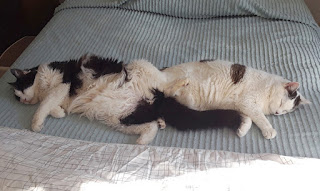