Recently, a remarkable story of loss and recovery unfolded in my small world. I was able to participate in it, and even contribute in a small way to the happy outcome. It concerns a cat whom I will call Crusoe. It is not his real name. I probably don’t need to change it, or any of the other names, as I have done; permission was granted by those involved for the story to be published in the PAW Society newsletter. However, permission was not explicitly given for me to reproduce the story on my blog, so I have altered identities. The pictures are not of any actual participants.

Crusoe had been rescued as a kitten, became a PAW Society cat, and was soon available for adoption. But he had developed anterior uveitis in his left eye. It was severe enough to warrant the eye’s removal. He had recovered perfectly, however, and, with the exception of being one-eyed, has been in excellent health since. Louisa and Andy adopted him in late 2019. He lived happily with them and their big dog Salty. 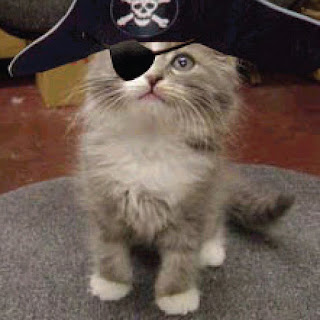 In the first week of August, the family went to a near by town’s campground in their recreational vehicle. As soon as the door was opened, Crusoe bolted outside. Andy made a grab for him and managed to seize his collar - only for it to break off in his hand. Crusoe vanished into the trees and brush. 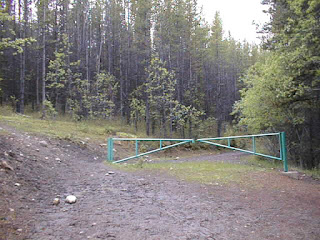 For the rest of the day, Louisa and Andy searched for him. They printed out posters and distributed them, and talked to people in the vicinity. At last, they had to go home. But they didn’t give up, and neither did the PAW Society. A ‘missing’ advertisement was placed on the Facebook page devoted to Nearby Town’s lost and found pets, describing where and when Crusoe vanished, and with pictures of his distinctive face and black and white body. Angela, a Society member resident in Nearby Town, followed leads that came in because of the ad. Contact was made with a campground employee who kept watch and helped the searchers learn of the topography of the vicinity. Traps were set amid the wilderness next the campground from which Crusoe ran. 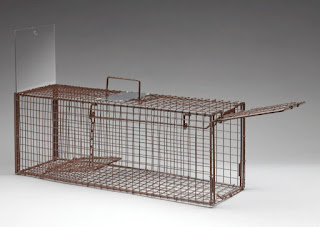 Weeks passed. A cat who looked somewhat like Crusoe was found dead along the side of a road. Angela performed the sad duty of identifying the body, but it was not Crusoe’s. The traps produced raccoons, who were released. The Facebook ad was constantly renewed. But with autumn coming, fewer people camping and, considering the density of the woods shielding Crusoe, maintaining hope was becoming difficult. 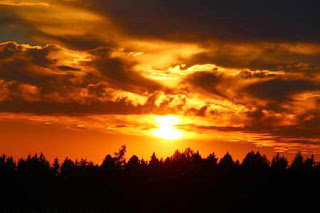 Then, on September 22nd, just after the Facebook ad was renewed, a woman in Nearby Town posted an urgent request on the ad for the advertiser to contact her: the missing cat was at her house; he had been coming there for food for three weeks. 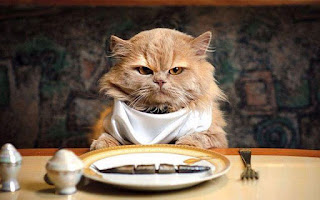 Things moved swiftly thereafter. I, who had been re-posting Crusoe’s ad, contacted my colleagues in the PAW Society, including Angela, who communicated with Tammy and Bill, the couple who had answered the ad. Angela put them in touch with Louisa and Andy. Tammy sent pictures to John, showing the cat, though not his face - he had been too shy for that. The pictures were sent to another PAW member, who had fostered Crusoe; she confirmed his identity, knowing the distinctive markings on his rear leg. Louisa drove out to Nearby Town within half an hour. Arriving at Tammy and Bill’s house, she didn’t see Crusoe initially, but then he came toward her. Shy at first, he recognized her at last, and was taken home. 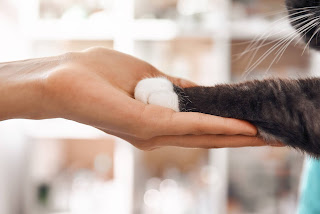 This may be the end of the story, but what about the middle? It’s perhaps the most remarkable part of the tale. Tammy and Bill’s house was up a ravine, across a farm-field and through ten blocks of small town housing from the campground. Crusoe may have been stranded, but he didn’t sit still in his strange world. He wandered until he saw a dog, a friendly dog, it must have seemed, and a dog who came and went to his house through a little door of his own. Tammy and Bill saw Crusoe sitting on their front lawn; they had always fed strays - at one time, they had a collection of a dozen cats and several dogs, all rescues, but now had just the one senior canine. But a cat in need couldn’t be turned away. 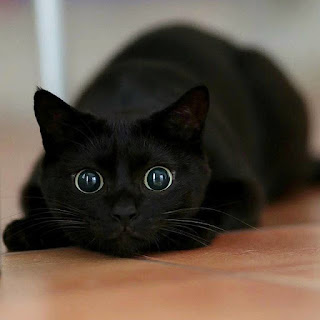 Soon Crusoe was coming into the house whenever he wanted food - three or four times a day. He would yell at his benefactors, eat, then leave. But he wouldn’t go far; having found a life-line, this castaway was not going to let go of it. He slept on a swing on the property, then started coming into the house at night, as the evenings grew cool. 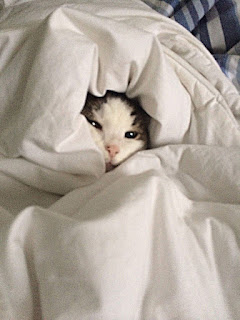 Crusoe could have gone to any house in the town, any on that street. Tammy and Bill stated that at some he would not have received the welcome he had had at theirs. They thought at first he was a neighbourhood cat; he looked in good shape and his missing eye was not a recent injury. Advertising his discovery did not bring results. But when a friend directed them to Crusoe’s ad on Facebook, they knew he had a home, and people were searching for him. They were happy to witness the reunion with his people. 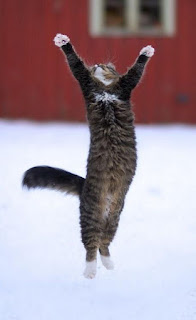 The number of people involved in Crusoe’s rescue was both large and significant, each playing a part, some lesser, some greater; all important. The chance of going to a friendly house out of many that would not have proven so amenable to him bordered on the miraculous, as did Crusoe’s journey from the campground. That he remained to be collected so quickly and easily after his lengthy absence is also noteworthy. Few sailors marooned on a desert island and eventually saved by a passing ship could have counted on as much luck as finally brought Crusoe home. 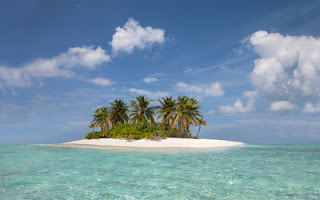 But he was home again, safe with Salty the dog and his mum and dad. But for increased vigilance by his family, all was as he left it. Well, except for one thing. Among the raccoons reluctantly captured in the trap set in Nearby Town’s campground was another little creature. The searchers’ campground contact called Louisa and Andy one day to tell them that a kitten had been trapped. What should be done about it? It would have been cruel to let him go. So when Crusoe returned to his home, he found someone new: not a replacement, but an addition: his little brother, Friday. 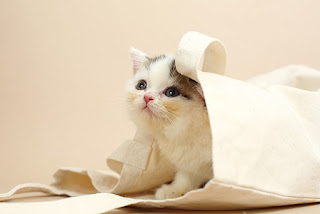