When I wrote yesterday that during my time off one of my beasts often becomes ill and I acquire a new cat, that was generally accurate, but not very detailed. Long weekends bring sick cats; holidays bring cats, period.

Kea was right when she commented on the previous article that I have a new addition to the Cosy Apartment’s feline population. Most of you know Jessel. Now, you can meet him up close. 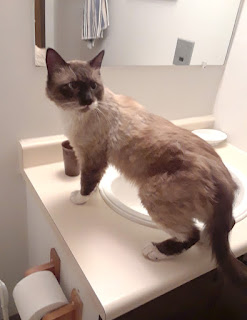 It was decided in the rescue-group to which I belong, the Lethbridge PAW Society, that this stray should be brought in and an attempt made to place him, eventually, in a permanent home. This isn’t done for every cat, of course, principally for the very good and unfortunate reason that there are far too many cats to rescue all of them. Just as realistically, though, and just as obviously, we cannot bring in genuinely feral cats. But Jessel’s slight interaction with me when he was outside held the possibility of socialisation and adoption.

Trapping him was easy – so easy, I feel guilty over it. I saw him outside yesterday evening as I was taking out the garbage. I figured when he observed me that he would come to my concrete ditch for a meal. I quickly arranged food in a trap, and prepared the way with Temptation treats. It was not five minutes later that he was captured. It was by far my easiest trap: Jessel was as innocent of such procedures as a kitten. 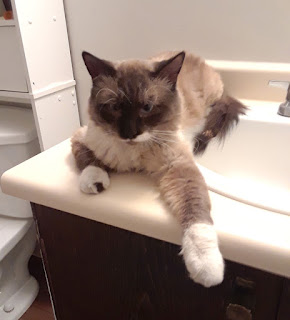 I had intended to keep him in the trap, in my bathroom, for a few hours, at least, but found that he was touchable through the bars, so I thought a larger jail-cell, in the form of a big carrier, was warranted. Trap-door was put against carrier-door, and Jessel walked with little hesitation into the carrier – and then squeezed out the two-inch gap between the tall carrier-door and the shorter trap-door. Well, the best-laid plans of mice and men don’t include cats…

But, while this escape could, with another cat, have been a major problem, it was not with Jessel. He quickly proved himself to be a socialised animal. From the first, he let me touch him, gently, though he accompanied the gesture with a high-pitched cry. He never moved away from me, and never appeared frightened, let alone terrified. As the pictures demonstrate, the new fellow did not seem that nervous around me. His manner was that of someone who, while not fearing another’s touch or presence, nonetheless wishes it removed. 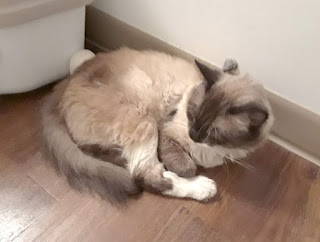 Jessel has eaten and, I think, drunk, so his sustenance will be no problem. He does have an aversion to using whatever contraption I place in the bathroom for him. I put a carrier in with him, and had a dish of food in there, to tempt him inside, hopefully to acclimate him to being in such confines. He would not go within. A litter-box, despite being filled with used litter, was disdained for the bathroom floor; he will need to stay in the bathroom until he trusts the litter-box. Even the soft, comfy blanket that Raleigh took to so readily is lying abandoned, the hard floor being preferred.

Countering these disadvantages are much more positive developments. I have been able to pick Jessel up; not enough to carry – that would be presuming too much at this point – but enough to move him from one spot to another, a few inches away. This will, of course, be essential when he needs to go into a carrier. And…I have been able to make Jessel purr. He apparently enjoys his head being vigorously but gently rubbed. 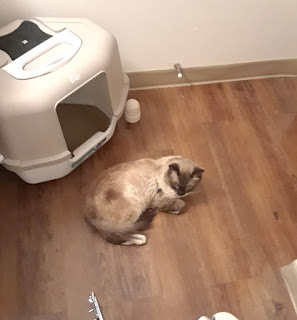 Jessel will be going to the veterinary for a full check-up but not until next week; that is how far in advance appointments have been fixed. The veterinary hospital the rescue uses has a smaller establishment than the one to whom my own beasts go, but even the latter hospital with six doctors is booking examinations two or three days ahead. Still, the newcomer will be safe where he is until then and, thankfully, I am on holidays, so I will be able to spend time with him throughout each day. I worry about what the doctors will find – FIV, in particular. Barring anything serious, though, there is no reason why this attractive and friendly cat won’t catch the attention of someone seeking to adopt a new best friend.
Posted by John Bellen at 9:18 PM