Jessel has gone home. This abrupt turn of events will, eventually, prove happy for him, but it is bittersweet right now.

Some of you who have been reading this blog recall when Jessel first showed up at Café Cosy. It was the first week of June. It took a long time to determine if he was feral (he was not) and if he was not feral, how socialised he was. Because of my findings, I decided to trap him and have him neutered, which I suspected he was not already. The rescue-group to which I belong, the Lethbridge PAW Society, would take him in, have him examined and treated by a veterinary, and then offer him for adoption, after recovery in my home.

I’d always known he’d had his own home, and was lost or abandoned, though I thought, considering how friendly he was, the latter option was unlikely; he appeared to have come from a loving place. I had looked for notices and advertisements that would have indicated that he was missing from his home, but found no indication that someone was looking for him - until the day of his neutering. How I missed the post on our local ‘lost and found pets’ site, I don’t know, but there he was.

He had a different name, of course, but the pictures displayed showed Jessel, down to the smallest similarity - there was even a whisker that curved over his brow and stuck to the fur on the top of his head with a little curl. Thereafter, things moved swiftly. Jessel returned home this morning.

He didn’t go without a fight, since he objected to being placed in a cat-carrier, the day after his last journey in one resulted in his medical mutilation (neutering). I feel bad about that. The little fellow had come to trust me. Even after he slipped from my grasp at my first attempt to capture him this morning, he leaned into my hand while I stroked his face. I felt like I was breaking his trust.

However, as was pointed out to me, if he had stayed with me in foster-care, I would have betrayed that trust eventually when he was adopted, and I would have put him in another carrier. Perhaps it’s as well that he left earlier than later.

The couple who collected Jessel seemed very nice and responsible. They told me that Jessel (though they called him something else) had cut through a screen (probably at the urgings of his non-neutered body). The screens have been replaced; Jessel will be, as he had been, an insider-cat. He didn’t recognise the people who had come for him: he had been missing since early May; besides, they were wearing masks. This no doubt contributed to Jessel’s panic.

But he has a feline sister and a feline brother, and a human sibling who misses him greatly. He has been fixed, tested for various illnesses (and found negative) and bolstered by some injections. This and a loving family will set him fair for a long, happy and healthy life.

But I will miss Young Blue Eyes. 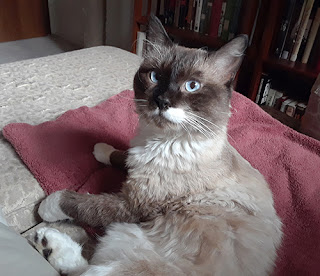