My Old Lady, a Little Older

This week’s worry is Josie. I wrote not too long ago, after her most recent visit to the doctor, that Josie was, with the exception of the infection she was then suffering, in very good shape for a sixteen year old cat. I think that has changed.

I have noted what I think is a sudden deterioration in my Chubs’s condition. She seems more frail than she had been even a week ago. She is moving more slowly, and she is much more hesitant when deciding to drop to the floor from the bedroom cat-trees.

I am once more giving her joint-medicine, though only thrice a week, and I have brought the small staircase from the sitting room couch and put it beside the bed. No one has used those steps since Cammie could see, and now the cats have four methods of ascending to and descending from the bed (three staircases, and straight across the computer desk to the cat-trees via the window ledge.) Josie often drops off the near side of the bed to get to Cammie’s bowl for a drink of water, and this will give her a less abrupt route. However, I think I need another means to make getting down from the cat-trees easier, as well.

My old lady is eating Z/D hard-food now almost exclusively. She went off of soft-food when she came back from the doctor the last time. She doesn’t eat a great deal, though I provide it whenever she asks and often when she doesn’t. I don’t think she resorts to the communal bowl of Orijen hard-food at all, and I can’t leave any Z/D out where Josie can get to it during the day because Neville would suck up the contents in a minute. But the Z/D hard-food kept Cammie going for several years before she decided that she liked the soft variety of the brand, too (which Josie does not.)

The Great White also seems a bit confused at times, going to the water-bowl and then standing, staring off into space, as if she has forgotten why she walked there. She sometimes needs food pointed out to her several times, even after she requests it. These may appear little things, and have innocent explanations, but when they come as changes to routine behaviour, questions must be asked.

I may take Josie to the doctor again; further tests might reveal what has happened to her. In truth, I suspect that age has caught up with her suddenly, as it does with many humans. But I will watch her and, if the situation warrants it, take her to the hospital. This is the part of having a cat that no one tells a prospective cat-owner about, yet it is, in many ways, the most important period of a feline life, the part at which they need their human the most. I don’t want to let my old lady down. 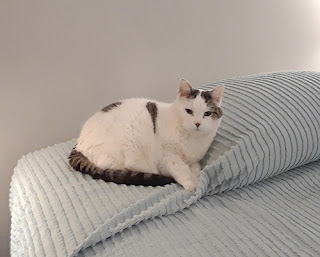