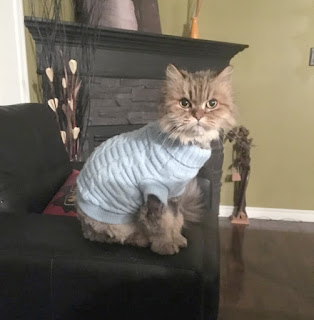 This is Minuet. She will be coming to live with me this afternoon.

She is a nineteen year old lady whose owner doesn’t want her anymore. Minuet wets outside her litter-box, and has done so for the sixteen years that she has lived with her current human. To her credit, the latter adopted her knowing that this little cat had a litter-box issue; Minuet was three years old then, and had been returned four times to the humane society in her town because of her problem. She would probably have been euthanised, if returned again.

Minuet had previously wet immediately outside the box. Now, however, she is choosing other spots in the house. The owner is moving and feels she cannot take her cat with her because of this.

Also, Minuet was diagnosed with diabetes a year ago, and her person feels that the twice-daily injections of insulin are too much to arrange around her work-schedule. Minuet is also likely deaf.

The new guest will go into my bathroom initially, which - along with the virtual destruction of her world and routine - won’t be conducive to better waste management habits. But she will be there only until I see with what she presents me, and then she will go into the library. Auric, who is not ready for full-time release from his isolation, will have to stay in my bedroom while I am absent. As may be seen, this situation is not ideal, but Minuet’s options were very limited, especially considering her wetting history and her more recent diabetic onset.

Minuet is the name I have given her. She has, right now, another which I find unfavourable but which sounds similar enough to be recognisable to her, if she is able to hear it at all. With a new name, a new setting and new views of her problems, she may yet have the chance for a peaceful and content final few years.