Renn continues to recover from his latest off-day. Thank you to all those who wished him well.

Meanwhile, Horace grows more accustomed to life in the Cosy Apartment. He and Hector, I regret to write, will probably never be friends. There is just something missing. The way cats react to each other is inexplicable. But they are emotional creatures and, like that other emotional creature – mankind – they choose their friends – and enemies – often on irrational bases. Auric became a real chum to Hec, even though the Golden Boy was the epitome of annoying to the Little Turk at first. Horace has never been more than curious with Hector. Maybe there is something in that contrast. 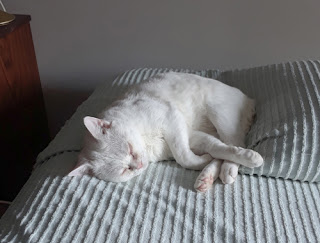 But Ivory is showing that he is an excellent companion for people and, in his benign association with other felines, he would make a fine addition to a multi-cat household. He alternates quite nicely between action and inaction. 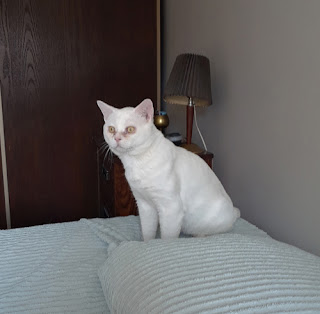 He sleeps on the bed most nights, though he just as frequently spends the dark hours on a cat-bed by a window, just in case something happens outside. This morning, I found him and Hector inches apart on the bed, both snoozing, at about three o’clock. That’s no indication of their conscious relationship, however, as a friend of mine once remarked that a human bed is usually a feline neutral zone. 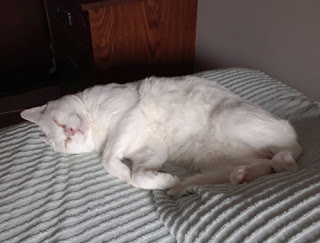 But Horace has the makings of a great pal for another cat, and a life-long companion for a person.